Information on the Inquisition Surfaces 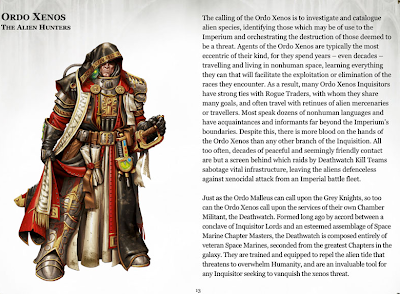 There are hints of the Ordos Xenos and their ties to Deathwatch, just like the Ordos Malleus is to the Grey Knights. Are these hints that Deathwatch is going to be included in this release, or a possible future release?

The Pic above was officially released by White Dwarf Daily. Check it out, because there are some intriguing possibilities mentioned there.


Also mixed in this are hints that not only will the Inquisition be tied to Imperial Armies, but also opportunities to join Xenos armies. Inquisitional Allies for Eldar or Tau? whoa. I have a feeling there is more to this Inquisition codex than we currently think. Things are about to get interesting.

Here is the latest information. Of course you can pre-order this book at the following link as well.
http://www.blacklibrary.com/games-workshop-digital-editions


via White Dwarf Daily
http://www.games-workshop.com/gws/wnt/blog.jsp?pid=11700068
The front cover, illustrated by Marek Oken, is just one of the new pieces of artwork in the book, which focuses on the strange, dangerous and clandestine work of the Imperial Inquisition. The book talks in great depth about the three primary Ordos: the Ordo Hereticus, concerned with hunting down witches and psykers; the Ordo Xenos, tasked with the extermination of aliens; and the Ordo Malleus, who protect humanity from the Daemons of the Warp. Other Ordos are mentioned too, such as the sinister Ordo Sicarius and the unusual Ordo Chronos, who investigate (and try to prevent) time travel. The different factions of Inquisitors are talked about too, ranging from Thorians to Monodominants. Many famous (or notorious, depending on your point of view) Inquisitors are also covered in the book, including Gregor Eisenhorn, Witch Hunter Tyrus and Torquemada Coteaz.

Codex: Inquisition allows you to include an Inquisitor and his retinue in your army, be they Space Marines, Imperial Guard or even Xenos races. There's unique wargear in the book, such as the Liber Heresius and new Warlord Traits which can help you define the role and personality of your Inquisitor. Are they readers of the Imperial Tarot or collectors of forbidden Xenos technology? There are also full rules and points for building an Inquisitorial retinue, including Acolytes, Arco-flagellants, Jokaero Weaponsmiths and plenty more besides. To help you start your own Inquisitorial warband, here's a selection of Inquisitorial miniatures, all of which are available through the Games Workshop website.
11/11/2013
Natfka
40k, 6th Edition, News Headlines, Rumors, Warhammer 40k