Answers to the Inquisition Codex 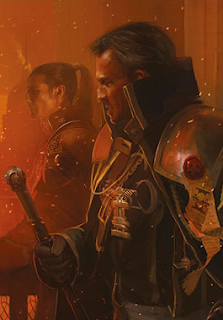 One big complaint about the new Inquisition codex is that the Inquisitors are very much identical to the Grey Knight entries. A copy/paste rage has taken over a lot of the list building creativity we normally see when something new comes out. So what was the reason for not adding in either new entries or options for the new Inquisitors? GW answers this.

The Question
via Zion over on Tabletop Wargaming
Just a little design question about Codex: Inquisition that's popped up and I was thinking you guys might be able to shed some light one: is the reason that the Inquisitorial stuff mostly stayed the same because it's in Codec: Grey Knights?

Also, when Codex: Grey Knights gets an eventual update, does this mean that the Inquisition book will see an update on anything that's shared between the books?

The Answer
via Eddie at Games Workshop digital
We try not to have wildly different rules for the same units in different places. The inquisitors in Grey Knights are still inquisitors, and your opponent should be able to know at a glance what they're up against when you put your models down on the table. (that's why things like Rhinos, chimeras and Tactical Marines have very similar rules wherever you find them).
Of course, one of the advantages of the digital format, is that you can change things much more easily, and you may well see changes to some digital codexes over time to match new print releases or new miniatures. (for example, the last edition of Codex: Space Marines had Storm Talons added when that model was released)
I hope that helps.