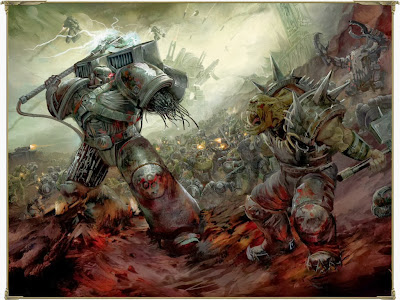 Already up for Pre-orders, we have learned that Clan Raukaan, a Space Marine codex supplement will feature easier access to dreadnoughts for an already tough Iron Hands army. In fact, for a mere 30pts there is a new item, called the Ironstone, which looks like a way to further repair these armoured walkers.


I have always been a fan of the Dreadnought, and with that grenades in close combat with walkers would return to their 5th edition status. However, this might supplement might work as well.

The Iron Hands already have the It Will Not Die special rule for their Dreadnoughts, and increased Blessing of the Omnissiah rolls. Looks like Dreadnoughts might once again start appearing on the tabletop.

via the Black Library
http://www.blacklibrary.com/Blog/Its-time-to-Raukaan-roll.html
For most Space Marines, the idea of being entombed inside a Dreadnought for all eternity is something to avoid. Not for the Iron Hands. They love being Dreadnoughts, and if you’re going to start replacing bits of yourself with bionics, you may as well become a giant walking tank when you retire.

Dreadnoughts are a common sight in all Iron Hands armies, but Clan Raukaan have a particular fondness for them, not to mention a glorious history filled with mortally wounded heroes: perfect candidates for Dreadnoughtification (we’re pretty sure that’s a real word).

To represent this, Clan Raukaan have easer access to Dreadnoughts than most Space Marines, and there’s even an item you can give your characters to make your armoured Dreadnought advance even more formidable.

Of course, Clan Raukaan also has its flesh and blood heroes (well, most of them is flesh and blood), and the new supplement will give them access to an all new Warlords Traits table and allow you to equip them with a formidable new array of Relics.

One of our favourites is the Axe of Medusa, which is sometimes gifted by Kardan Stronos to warriors of Clan Raukaan before they set out on important missions (particularly against enemies with 2+ Armour Saves, we assume).