Escalation and Stronghold Assault Are Up For Pre-Orders 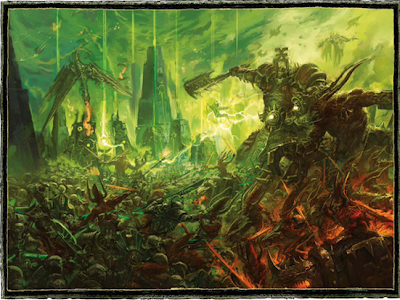 Both game expansions, Stronghold Assault and Escalation are now up for Pre-Orders on the Games Workshop site for a release on Dec 7th. At the same time, digital releases for the ipad, ebooks, and other media are also up for pre-orders.


Digitally you can download the sample of each, and check out exactly what it is that we will see for these releases, and like we have reported here for a month now, these are for regular or normal 40k games. Here is what the release is looking like.

This 96-page, full colour, hardback supplement contains:
·    A background section introducing Lords of War units and their terrifying impact on the battlefield.
·    All the rules needed to play with super-heavy vehicles (including Flyers and Walkers) and Gargantuan Creatures, as well as rules for their potent wargear.
·    An amended force organization chart that allows players to choose Lords of War units as part of their standard Warhammer 40,000 armies.
·    Datasheets for every plastic super-heavy Citadel miniature, plus a selection of super-heavy vehicles and gargantuan creatures from Forge World.
·    A showcase of expertly painted Lords of War Citadel miniatures.
·    New Altar of War and Gauntlet Challenge missions that can be played instead of the Eternal War missions in the Warhammer 40,000 rulebook.