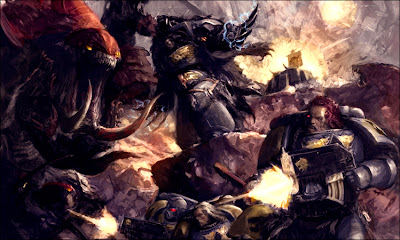 A new Tyranid kit that allows one of two models to be built, the Tyranid Dominar or the Karkanos are now in the rumors rounds. This rumor goes into some of the details on the what these models will look like, as well as the rules. These would be big models.


There are a lot of Tyranid rumors coming out of the Bols Lounge lately, and this seems to require a little more salt than the others, so please remember that it is a rumor.

via Big Red on Bols Lounge
"The Dominar embodies Tyranid Hive Mind completely. Within its shadow, lesser creatures bow in servitude, and larger Tyranids find greater access to the warp. It's armored shell protects it from the most powerful weaponry. Any enemy foolish enough to close with it will find no mercy, as it's claws and teeth rip through flesh and armor plating with ease, and within its massive body lie all manner of symbiotic organisms willing to defend their host.

The Karkanos is a lumbering, living fortress. Upon it's back, smaller Tyranids will gather for protection, waiting for the opportune moment to strike at their foes. Bristling with weapons, it can decimate foes as they close, while it's passengers target other enemies.

This multi-part plastic boxed set contains 84 components with which to build one Tyranid Dominar or one Karkanos. This kit contains all the weapon options available to the either creature including cluster spines, heavy venom cannons, brain leech devourers, and acid spray. This kit contains one Large Oval base. It is supplied unpainted and requires assembly - we recommend using Citadel Plastic Glue and Citadel Paints."

"The dominar has a 18" synapse range and Shadow in the Warp range, and increases the psyker level of all Tyranid Psykers within 6" by 1 level. Also has It will Not Die, psychic Monstrosity, IC(c) and can take most Tyranid Biomorphs. It's bigger than the Tyrranofex model, wider with a taller stance, huge head with a massive brain under a wide plate, large mouth like the trygons. It has three rows of vents along the back plates, but the back plates come up behind the head like a turtle, offering protection."

" the Karkanos looks like a crab. It has a wide flat body, the back plate is sunk in and has a ridge around the outer edges. It's front set of arms can hold a few weapon options like venom cannons or devourers or can take claws or talons. Transport capacity is identical to the spore, but it cannot carry MCs. It is a dedicated transport option for the walking troops: warriors, Genestealers, hormigaunts, Termagants. Open top. Has special rules to handle being a MC and transport...not a vehicle. It's probably one of the most expensive dedicated transports in the game. Can be taken in heavy section solo."
11/05/2013
Natfka
40k, 6th Edition, Rumors, Tyranids, Warhammer 40k