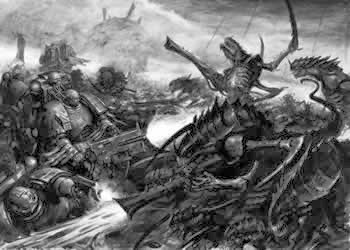 Now that we have an idea of what the first half of December is going to look like, there are a lot of people just dying for a Tyranid update. That counts me in as well. Tyranids are just one of those iconic armies, that most of us feel needed to be better on the tabletop in 6th edition. So where do we stand?


We were thrown a bone and given some insight to what is going on, and probably the cause of the confusion on whether or not Tyranids were to be released in December or January. Here is that rumor, from a good source.

This is from over the weekend in case you missed it.

via an anonymous source on Faeit 212
December Releases, Tyranids and 40k Expansions
Tyranids are getting 2 boxes (3 total units) dec 16th ish.
These are for current codex models.
New codex in Jan along with new models.
Every (non special character) unit will have a box as of jan.

Most likely the new models will include the Hive Guard box set we have seen recently all over the web, and something else.

Its also important to note that we saw a release schedule released yesterday for December, but that the dates listed on it, end on the 13th of the month, leaving the entire rest of the month a possibility for something like a couple box sets to slide on in.