The Black Legion Released to Hardback and Chaos Collection 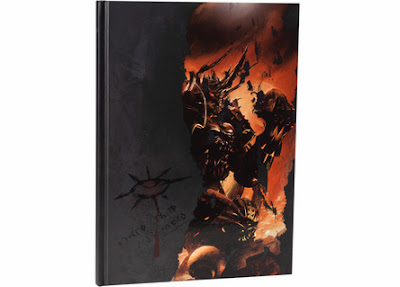 The Black Legion is now available in print form now, either in a standard edition or limited edition hardback. This supplement allows you to play the Black Legion and field Chosen as troops with having to use Abaddon the Despoiler as your HQ. Of course there are other benefits as well like upgrading your terminators.


A good friend of mine has been using this codex supplement now for a couple months, and getting good use out of his chosen squads without having to pay the point cost of Abaddon.

Also you will find a new Chaos Collection that includes both the Chaos Daemons and Chaos Space Marine codices alongside the Black Legion supplement and an art folio.

Here is your link to check out these new releases
http://www.games-workshop.com

via Games Workshop
Within the 72 pages of this book you will find:
- The story of Black Legion's fall from grace and rise to power, including the tale of their infamous Warmaster, Abaddon the Despoiler.

- A set of supplemental rules including Warlord Traits and Chaos Artefacts that, along with Codex: Chaos Space Marines, allow you to assemble your Black Legion models into a force for Warhammer 40,000 battles