Limited Editions and the Hatred of Them 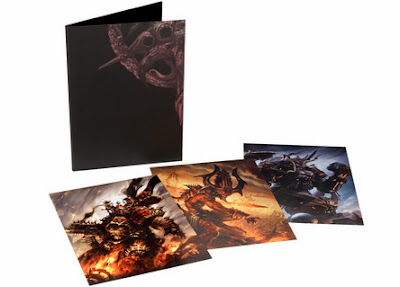 Limited Editions and other various collectors releases have been very prominent in 6th edition, as is the vocal outcry of foul among many in our community. Everytime there is one, there is always a plethora of commenters decrying corporate greed as the driving force behind these releases.

This hatred of Limited Edition releases baffles me, and I fail to see any real logical reason for the venom spewed everytime a limited edition version is announced.


Most of the limited editions are a 500 copies run. That means that this is it, its a short term small investment for a small return in the overall scheme of the company. So corporate greed is not logical. There is no long term and very little short term profitability.

So why have them? Because there is a demand for them. Its that simple. There are many hobbyists that want these, and if they are not that pervasive in your neighborhood, dont worry, because there are at least 500 people in the world that want them. If there wasnt Games Workshop would not be still doing them.

Do I own a single limited edition version of any release from Games Workshop? No. Why? because I can purchase the digital or print copy of the release instead and get what I want and need out of it. I have considered picking one up, and may when Dark Eldar are released for 6th edition, but I generally dont give these editions a second glance.

So for me, the limited edition releases are not on my list of things to get. That doesn't mean that I dislike or hate the people that do want these, because obviously these people exist. I would argue that some if not a lot of the hatred towards these releases are because someone is upset that others have more disposable income than them. Not all of it I am sure, but a lot.

All the hatred towards Games Workshop for providing these is misplaced. No one is being forced to buy these to play the game or be apart of the hobby. Games Workshop has done an excellent job, and in my opinion went way over the top at providing the hobby with many different options for us, whether digital, print copies, and expanding to other platforms.

We are a very large worldwide community, from different backgrounds, economic levels, and different ages. The limited edition releases are not something that should upset us so much, as its just one more avenue that some of us enjoy in the hobby. If its not your cup of tea, its no harm no foul.
11/28/2013
Natfka
40k, 6th Edition, Warhammer 40k