Home » Rumors » Tyranids » Where are the Tyranids?

Where are the Tyranids? 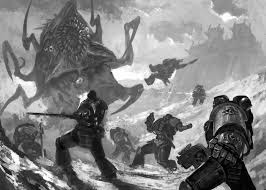 I have heard it from the comment section and from email, and that is a lot of doubt and concern that Tyranids are not going to be showing up here in a few weeks. The silence is just killing some of us.

So here is a very likely possibility.

Please understand this is speculation based upon information and rumor.

Where are the Tyranids?
Normally at this time, or very soon we normally start to hear or see things popping up on the web with leaked images here and there. This release could very well be different. Why?

Tyranids were Scheduled for January
The December White Dwarf was rumored to not have Tyranids in it. Of course that can't be the case if Tyranids are going to be released. There are rumors that a schedule change is pushing forward Tyranids, and if that is the case, and December was most of the way ready to go without them, a sudden change in the line up for whatever reason, would be why there could be a delay in rumors and White Dwarf leaks.

Back in my architecture days, there were many times that we had last minute project changes, or something was moved. The big push to move things around if very difficult and often meant running out to the airport to deliver to Fed Ex the latest set of Drawings before the plane left.

So assuming a last minute change was done moving Tyranids forward, there has been less time for leaks to occur, and information to get out. Not that pushing something like a major release like Tyranids to the last minute push is a good thing, but getting product shipped out, making sure everything is a go is not something that is just done on the fly. If Tyranids are coming in a December release, there are many people working late and not getting their sleep to get everything ready for us.
11/19/2013
Natfka
Rumors, Tyranids