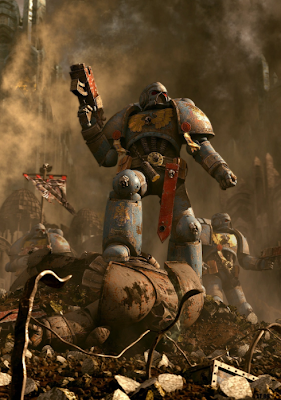 Warriors Code in 2014? Could this be a whats what guide for whats legal in tournaments? Hard to say, since I was not there. It seems that at the Throne of Skulls there were some very tight "what is proper" rules being enforced. Including how your models are painted for what armies.


I personally would like to see this, an official statement or rules pack for tournaments. Whether or not they were enforced or used outside of a GW tournament is another matter. It would get rid of some tournament shenanigans, and guide the community a little bit.

via Denzark on the Bols Lounge
Just back from my latest foray into the GW tournament, Throne of Skulls. I thought you might like some information on the meta there, things I saw over the weekend, and a few rumours etc

Rules
GW yellow staff were being quite tight in areas. There is a new 'Warrior's Code' coming in for 2014, but they seem to apply them from this weekend. This included:

All painted Armies. Now, GW state they will not apply a '3 colour standard' because this is open to abuse. They picked up on someone with a very basic paint scheme that was supposed to be white scar bikers that seemed to be a white primer, a wash and some boltgun metal on the bike engines.

No proxies. This is subject to interpretation, but they seem to enforce it based on 'if it has a model is must be used' and conversions must be pre-approved if heavy and not blatantly obvious what the mini is. One fellow who fell foul had an immaculately painted army with Dark angel minis, but painted as White Scars. Even though it had conversions like landspeeders with twin lascannons for preds, he was made to re-write the list as a White Scars list. So the big ugly speeder was a LR etc. I thought this was quite harsh.

Others included me being asked why my drop pod doors were glued shut - ummm because I don't like them flapping around, I can't be arsed to paint the insides and also because i was not aware the rules said a vehicle's doors must be modelled to open?

Rumours
These were picked up from attendees not any GW staff. I cannot comment on the provenance. But, 2 main ones. Firstly, plastic T-Hawk is designed. However it currently takes 7 sprues. Apparently the problem is that the big boy kit machine can only do 6 at a time. So the sprues need rehashing to try and cram it all in to make it economical. (I know, I know...) The other is that plastic Sisters are done. The timing of the new codex is an attempt to whittle down some apparently high stocks of current metal.
11/12/2013
Natfka
40k, 6th Edition, Rumors, Warhammer 40k