The Warriors Code vs Forgeworld Models Being Legal 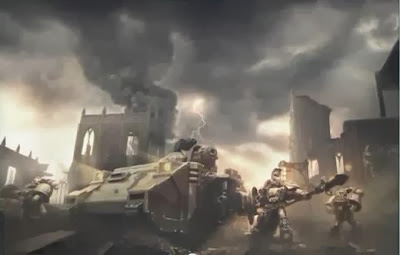 We have had great conversations about Forgeworld being integrated into standard 40k games, and have even had Aaron Dembski-Bowden chime in on the subject. Well today we have Warhammer World's Events Manager at Warhammer World get his say on why Forgeworld is not allowed at the Throne of Skulls.


Now before you get throw yourself into the fray, realize that things like this make it very difficult for the average hobbyist, or tournament goer to make a calling on it, not to mention for tournament organizers. This is where our rift comes into play, and the community is divided.

I do believe that Forgeworld models are now legal (a stance I would of opposed several years back), but when we get hit with a non-cohesive front and there is not clear voice, what are we supposed to do?

via a reader here on Faeit 212
The Warrior's Code document is pretty clear about which books you can use! The Imperial Armour lists are not on the list, so I'm afraid that means they are not in use at most of our events.  We do allow their use at some events, notably Campaign Weekends, Legendary Battlefields and Forge World specific events. You can, of course use the models as appropriate stand-ins eg Death Korps as Imperial Guardsmen and Contemptor Dreadnoughts as Dreadnoughts!

The reason we have made this call is that Forge World products are, essentially, expansions to the main Warhammer 40,000 game, much like Apocalypse, Cities of Death and Planetstrike. As such, we choose to allow their use where the format of the event suits it. Forge World have told us their lists are designed to be used as narrative, story telling armies, not necessarily for one-off pick up games. As such, we follow their advice!

And on the Other Side of This.....
From a couple weeks ago

via an Article on the Subject
http://natfka.blogspot.com/2013/10/forgeworld-becomes-official-for.html
via an anonymous source on Faeit 212
immediately afterward (codex Inquisition) we'll be seeing the Forgeworld forces of the space marines and inquisition to update all those rules as well.

Also, while written to be polite, the sentence that says "while this should be considered official, check with your opponent" in the Forgeworld books is being changed.

In the new forces of the SM and Inquisiton it says "these are official, but make sure your opponent knows the rules of any models chosen from this book." (quoting from memory so syntax may be slightly different)

So... Let's all welcome Forgeworld to the table.


from the Comment Section of the article
aarondembskibowden   October 31, 2013 at 5:41 AM
It's been official since forever. People have always taken polite phrasing to justify their incorrect opinions on what's official.

To GW, it's all official, and always has been, Like it or not, that's the literal truth. To see it being heralded now as something new to adapt to (or worse, that it's still not official) is the very definition of missing the point.

aarondembskibowden   October 31, 2013 at 5:44 AM
I just gave myself PTSD flashbacks to the time I foolishly tried to explain that simple policy to 3++.
Oh, the rage. Oh, the resistance.

aarondembskibowden   October 31, 2013 at 7:04 AM
That's the thing. GW has released that statement, but the fanbase mistake it as "Forge World is a different company, so they don't count."

GW have released the statement countless times. With the 40K Approved stamps. With Forge World stuff being on almost every page and in almost every army in White Dwarf for months. With every Imperial Armour book since #2 saying "Consider these official, but be nice if an opponent hasn't read the rules, so ask permission." Because of that misunderstanding becoming so entrenched, FW changed it in recent updates to "inform your opponent you're using these rules" with no "ask" at all.

That's how GW chose to release the statement. It's the same as Black Library being canon. To GW, it's all the same, it's all canon, it's all official. But because people apply their misunderstandings to how the company functions, you get this meme about needing "GW" to release a statement.

They did. They have. It's clear as day. People just don't realise what GW is, and take their misconceptions as truth.

aarondembskibowden   October 31, 2013 at 8:26 AM
They have, though. That's the point. The company's made it abundantly clear. "GW" has made the comment through every avenue it's chosen: it's plain across White Dwarf; it's mentioned on Forge World's Facebook page every time it's asked; it's at every single signing and seminar and open day from countless staff in every department; it's in every single Forge World rulebook... FW *are* GW. The Black Library is GW. The "separate company" thing is massively misunderstood.

People set the boundary on this themselves, saying "I think the company works like X because I believe Internet Meme Y" so they start on incorrect foundations, and then move on to "The only way I'll be convinced is if GW issue a statement". GW *has*, countless times. People just choose not to believe the parts of the company that actually communicate with the public, and insist a statement must come from some mythical entity that doesn't actually exist.

Clever stuff, really. To set the goal lines in a place the other side of the argument (and the truth) will never reach. It's no different from saying that you'll only believe in dinosaurs if God sits you down personally and tells you they were real. The fossils and other evidence isn't good enough, but that's all reality will provide, because that's how the Earth works.

aarondembskibowden   October 31, 2013 at 7:08 AM
I think the biggest misunderstanding is the triumvirate of "companies" that make up GW.

They're just departments, in the same building. Their designers all go to the same range meetings. Their top brass all talk, all plan, all discuss stuff.