Some Details on December Releases 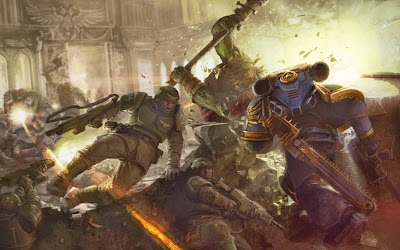 There is a lot of talk about this month's releases, from the Desolation of Smaug, the Ultima Space Marine Edition, Escaltion, and Stronghold. This goes into more about next month's releases, including mentioning of a lot of digital releases, and Forgeworld's Imperial Armour 2.


These are not rumor, but a person reporting what he has seen in his copy of the White Dwarf. Note that he posted a lot of pics up on Dakka, and of course they were removed.

via Pouncey
The only new models seem to be from The Hobbit. The Desolation of Smaug is the name of the expansion, and there is no Smaug model. There's a bunch of new models. The list of models near the beginning of the thread was accurate, at least in terms of new models being released (not sure about price, as I am too tired to start comparing all the prices) The Palace Guards, Legolas, Tauriel are all mentioned as being in plastic. Beorn, the Spiders, the Ranger Captains, the Palace Guard Captains, are all mentioned as being in Finecast. The Rangers, the set with the dwarves in barrels (with Bilbo on a barrel too), Thrain, Thranduil are not mentioned as being plastic or Finecast specifically, and their pictures on the Full Release Listings page don't mention the materials. The Barrel out of Bond set is Online Only.

Yes, the Ultima Edition of the Space Marine Codex IS that gosh-darned expensive, and is available by online order only. Comes with 4 hardback books in a display box, volumes are titled "Galaxis," "Illuminatus" "Adeptus Astartes" and "Codex" respectively. Each book contains different stuff, including a foldout map of the galaxy, with Space Marine-related details on it, Another is an art book. Another is a gallery book that shows off every Space Marine model in the range, all painted by Eavy Metal with multiple angles and close-ups. The fourth book is the full Space Marine Codex..

For 40k, Escalation lets you use certain superheavies and gargantuan creatures in otherwise normal games of 40k, with every army getting at least one superheavy or gargantuan creature or similar biggun, with some getting access to more. Stronghold Assault lets you use more fortifications than normal in a normal game of 40k, and the book provides updated rules for using fortifications (possibly just for Stronghold Assault, they didn't specify).

In Fantasy, Sigmar's Blood is a narrative campaign supplement book. Contains rules, hobby stuff, historical info, scenarios, and "examples of painted Citadel figures". The point is apparently to get a few players to get together and recreate the armies and battles described in the book. Apparently there's a scenario for every major battle described in the book. A variety of heroes and villains are described, and apparently there are ongoing effects from one battle to the next, and the outcome of a battle can affect other battles to come.

They're apparently doing something in December with their Digital Products section, from December 1st up till Christmas Day, there'll be something new to download on the "Advent Calendar" whatever that is, each and every day. Apparently they're bringing back a "much-loved" (quotes are to indicate it is their words. quote marks not present in the wording in the magazine) Warhammer 40,000 character on Christmas Day. Naturally, they don't specify who. The first download is Munitorum Volume 1. Other digital releases in December are "Warhammer: The Rules" Fantasy, not 40k.

Some Licenced Games, including Only War: No Surrender, and Warhammer Diskwars,

Black Library books include: Bane of Malekith, about Tyrion and Teclis fighting Dark Elves. Sigmund's Blood (the title of a novel and a related campaign book), about Volkmar the Grim hunting down vampires. Pandorax, an IG novel about Catachans fighting Chaos. Something about an art book called The Horus Heresy: Visions of Heresy, but I'm not sure whether they're trying to get people to buy up the last collector's editions or what. An exclusive version of The Horus Heresy: Macragge's Honour with different cover art from the earlier release will be available from Black Library's website for two weeks, starting December 25th.

Forge World's releasing Imperial Armour Volume 2, Second edition, apparently all about Space Marine vehicles with new rules, new pictures, and new graphics. Basically an updated version from the sounds of it. The new rules will apparently let you customize your vehicles by designating them as veterans of a specific campaign or making them ancient artefacts of their Chapter. There's also a new Character Series model: Erebus and Kor Phaeron
11/28/2013
Natfka
Forgeworld, News Headlines, The Hobbit, Warhammer 40k, Warhammer Fantasy