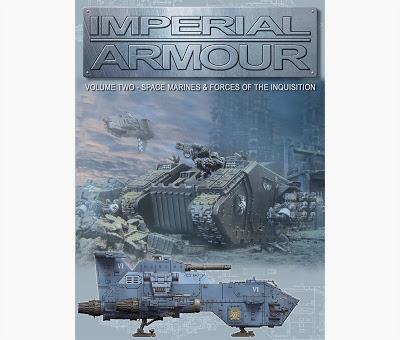 This weekend at Warhammer World Imperial Armour 2 was apparently made available for pre-orders and some people there got a chance to look at it. This is one of those accounts.

Imperial Armour 2 will be huge and is said to include many of the 40k stamps of approval in the listings for both Space Marines and the Inquisition. There is even the Repressor for the Adeptas Sororitas.


Please remember that this is still in the realms of rumors, as nothing official has been released.

via an anonymous reader on Faeit 212
I happened to be in the right place at the right time, to learn something that I haven't seen widely circulated on the net yet. This Saturday at Warhammer World, they were showing off the new, completed and printed Imperial Armour 2: Second Edition book and were taking pre-orders. I was there on the Campaign weekend and one of the staff let me have a quick look at it.

As I don't play Space Marines, I can't help out on any changes regarding them, but I did see that the Sisters of Battle are in the codex. There's no new units, but the Repressor will now be able to let embarked units fire out of the top hatch and use the fire points at the back.

Inquisition vehicles do get their own separate chapter, but again, I'm not familiar with what they were before, so I have no idea if there are any changes to that.

Someone else at the event told me that the book contains quite a few of the existing Space Marine 30k vehicles with a '40k approved' stamp next to them.