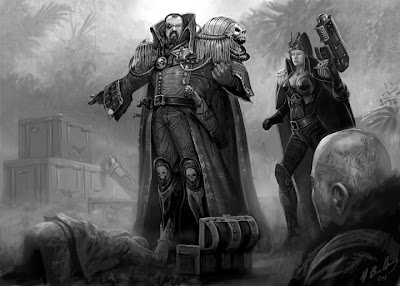 What is it that everyone is talking about with an Inquisition Death Star unit? Well it runs off of Death Cult Assassins and Crusaders which in reality is nothing new. However there are a few new twists to it in the new codex. So lets take a look at people are talking about.

In codex Inquisition the load out looks like this.
numbers can be varied of course as there are plenty of options
5 Death Cult Assassins
4 Crusaders with Power Axes
2 Priests
1 Xenos Inquisitor

Land Raider Variant of your choice as transport.


Death Cults striking with AP3 weapons at I6 is cool. They are fast, good number of attacks, 2/3 and 4 on the charge with a WS of 5 and S4

Crusaders are simply there to absorb hits with their storm shields. 3+ invul saves with re-rolls keeps your squad alive in dire circumstances. Dont forget to give them power axes. You need the extra AP2 weapons, and anything else your Death Cult Assassins should be able to take care of.

Ministroum Priests have War Hymms which allow you to take a leadership test at the beginning of Fight sub-phase in which is he locked in combat. Once passed the abilities you can choose from are the following. (I want two priests because I want to take the Emperor protects and righteousness of the emperor every round).

Obviously the last link is optional, but I like it. It just adds points.
Xenos Inquisitor with Rad and Psychotroke Grenades. Of course you need to make him a psyker, because why not have prescience and a free force sword. With Prescience your unit will be able to re-roll to hit in assault, re-roll to wound (with a priest), and basically just slaughter whatever you run into.

Now you can take a Land Raider transport and take the Liber Heresius to get scout for the Land Raider and use other abilities as you need.

The unit will run about 270pts or more depending on load out, before the land raider. Dont forget your servo skulls
11/17/2013
Natfka
40k, 6th Edition, Warhammer 40k