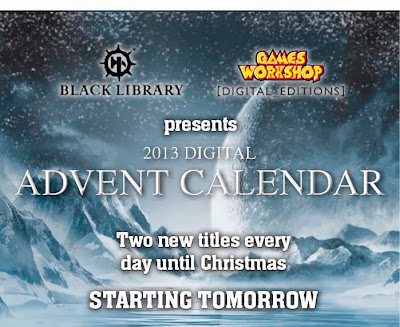 Games Workshop Digital Editions and the Black Library are going to have a full 25 days til Christmas, with two new titles released every day. We can only hope that it all starts with a bang, and Eddie over on the GW Digital facebook has given us a hint to one of the first releases of December. Tzeentch.


Stay tuned and we will know here in a few hours exactly what is coming. By the time I wrap up Saturday night's 40k game, it should be late morning in the UK. Answers are just a few hours away.

Since its Tzeentch oriented, I am going to make a good guess that one of the titles announced will be for 40k and one for Fantasy.


via Games Workshop Digital
We have something really cool starting tomorrow.
I'll have more news for you all in the morning, so stay tuned!

All will be revealed tomorrow.
(And whatever is released, it is all part of Tzeentch's great plan.)