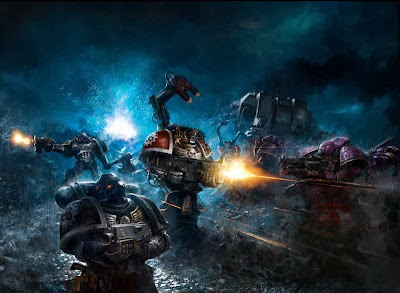 The Iron Hands are an instant favorite amongst Space Marine players, especially those of you that like to field lots of tanks and armour. This coming Saturday, the second Space Marines codex supplement, Clan Raukaan will go up for pre-orders for the digital version.

Note the image above has been officially released by the Black Library.


The Black Library today released some information on what to expect with this supplement and here is a segment of what they said. For the entire article just follow the link
http://www.blacklibrary.com/Blog/clan-raukaan.html


via the Black Library
Clan Raukaan is the second supplement for Codex: Space Marines, following on from Sentinels of Terra last month. The main focus of the book is the 3rd Company of the Iron Hands, but this is also by far the most comprehensive look at the background of the whole Chapter we’ve made yet, covering their 10,000 year history of battle in the Emperor’s name.

The Iron Hands are famous for two things: their reliance on machines, and the fact their Primarch lost his head in the heat of battle (literally and figuratively).

The new rules in the supplement represent both, with alternate modes of army selection allowing you to call on the armored might of Clan Raukaan, and Warlord Traits that mean your commander either embraces his Primarch’s legacy of battle fury, or has learned from his mistakes, and approaches battle with a cold, murderous logic. There’s also an impressive new arsenal of relics, fit for the champions of Medusa.