Inquisition Death Star On Steriods: You Asked for It 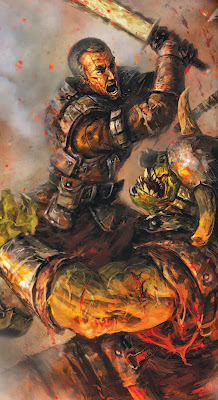 Alright, I was not going to go here, and stick with just the Inquisition codex for a death star unit. Yes, thats right, I don't like to tell people what I am thinking and preparing to field (I save my best ideas for myself).

If you are just checking in we were discussing the Inquisition Death Star listed here.
http://natfka.blogspot.com/2013/11/inquisition-death-star.html

A lot of you chimed in and where going many different directions with it, well, you may want to hold onto your seat.


Let me start out by saying that I like this list best as a White Scars Primary detachment, but if you really want IG as your primary you can do it the other way around.

White Scars Independent Character.
Personally I like using a Chaplin for this because of Zealot, but others work as well and its a matter of pick your White Scars flavor. Just keep the cost down and dont go nuts. Why White Scars?............ hit and run. Your opponent can get bogged down but you cannot.

Imperial Guard Platoon
Whats not to love here. 50 guardsmen. Dont forget the krak grenades to kill any dreadnoughts and just to be prepared you need melta bombs and power axes with your sergeants. You can also if points allow add in commissars to your hearts content, but you do not need Ministorum Priests if you have a chaplain. It is efficient to add in 5 flamers so that if you are assaulted you can punish the opponent.

Xenos Inquisitor
Of course you know where this is going by now. Psychotroke and Rad grenades, and dont forget to make him a psyker for Hammerhand.

Creed?
if you are like me, he is expensive but with a 24" order bubble, the orders of run run run, and For the Honor of Cadia (furious charge), he is worth it. He is a cost, and there are other ways of getting furious charge, but look at this way... Furious Charge makes your guardsment S5 on the charge with hammer hand, and even a marine will be reduced to T3.

Yea, thats right, 50 charging guardsmen with rad and psychotroke grenades. Not to mention they cannot get bogged down because they have hit and run. Power axes are striking at S6 ap2 and will insta kill marines that are effected by the rad grenades.

On the charge, re-roll to hit, and wound marines on a 2+. If you get bogged down and counter charged, simply hit and run (dont roll a 6) and then charge again, once again bringing your grenades back into the effect. multi assaults do not slow you down much either, as the psychotroke grenades are just devastating.


The best part of this all, is you can actually do two of these for units around 1000pts +/-. 100 fearless guardsmen loaded up with the Inquisition and White Scars. You can really adjust a unit like this up or down with other options as well.