Mini-Codex's in Our Future, and Their Past 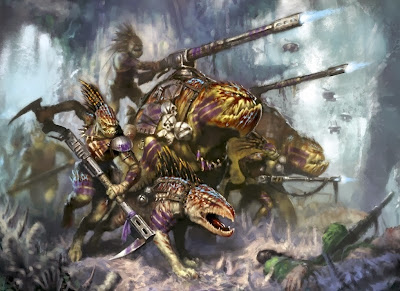 About a year or so ago, we spent a considerable amount of time talking about mini-codices that were playable and yet, did not use up a full Foc. These codices were in fact designed to be allied codex's. Now that we have one of these codices, the Inquisition, what could that mean for the future of what is to come?

Here is a rumor we had from July of 2012 from an anonymous source that was part of a behind the scenes conversation.
There is a strong desire to add new and interesting ways to use allies, beyond just mixing and matching existing armies.

In the Future
This is just a look at some of what could be coming, these are not rumors, although a few do mention previous rumors.

A Kroot codex is probably the first thing that comes to mind, as well as an expanded alliance for the Tau. These would be good mini-dexes. These have been rumored, and probably even playtested out some, as we had lots of rumors in the past of "other" kroot being worked on and even modeled. A Kroot codex is hopefully not too far off.

Legion of the Damned. Ok, there has been no rumors of this, but this is on my wish list. They would fantastic to dig into their origins and even perhaps vary them some.

Gaunt's Ghosts. Those guys we love to read about. There are just not a lot of them around, and a mini-dex would be very cool to have a squad or two of them running around. This is by far wish listing way down the road, but how fun would this be?

Book of (Chaos Gods). Yes, this is already rumored to be coming next year. What format are these going to be in? Mini-dex, codex supplement, or possibly even their own full codex? We just dont know right now, but the most obvious format would be that of a mini-dex. Not only would a mini dex suit them, they would be quicker to make without having to create a ton of new units for each one.

Tzeentch is rumored to be first, and that would be a ton of fun, and throw some life into the people that want to combine daemons and marines in new ways. Of course we recently had a Khorne codex rumor as well, even if it was a little far fetched.


I know there are lots of other ideas and other armies that could easily fall into the mini-dex format, and I am sure I am missing some more of the obvious ones, or others that would be excellent to fall into this category.

This games is expanding fast, and is becoming extremely variable on what we can play and face across the tabletop. I believe the future of this game over the next two years will be very exciting for us as a hobby and game.