The Vehicles of the Inquisition 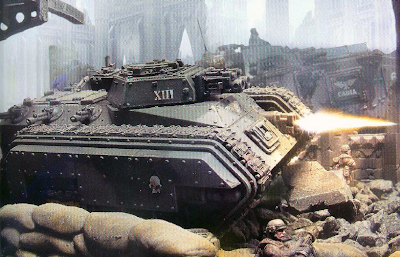 There are some interesting things in this codex. One of which that should stand out are the dedicated transports. Why? There are some distinct differences between the Grey Knight options that we are used to and the new codex. New opportunities.

Chimeras.... or now called Psymera
Chimeras with their 5 man Firing Point. This is always a huge advantage that players can take advantage of, but until now the Grey Knight Psyback sitting at 50pts has stood out as the most advantageous. Now we have something new.  The Psymera. Yes you heard me right, a chimera can take Psybolt ammunition. So a Chimera can take a turret mounted Heavy bolter, a hull mounted Heavy bolter, and then take psybolt ammo making them all S6. A psymera only costs you 60pts. Amazingly psyflame ammunition did not make the cut for the chimera.

Valkyrie
Now this bird is a new dedicated transport in the Inquisition codex, and a very cool one at that. No there is no Vendetta option, and no you cannot take psybolt ammo with this beast. Its options are rather standard, but is very cheap for what you get.

Land Raider Crusader
Of course you know I am going to just add in psybolt ammo on this one for its hurricane bolters and assault cannon.