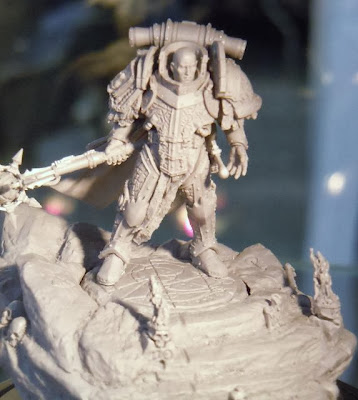 The Primarch of the Word Bearers, Lorgar is about to be released to us here very shortly, and will be up for sale among staff this coming week, according to the latest rumors for Forgeworld.

The model shown above, was revealed at Games Day UK.

"All I ever wanted was the truth. Remember those words as you read the ones that follow. I never set out to topple my father's kingdom of lies from a sense of misplaced pride. I never wanted to bleed the species to its marrow, reaving half the galaxy clean of human life in this bitter crusade. I never desired any of this, though I know the reasons for which it must be done. But all I ever wanted was the truth."
— Opening Lines of the "Book of Lorgar", First Canticle of Chaos

via an anonymous source on Faeit 212
Lorgar will be released by forgeworld for staff to buy on Wednesday.
Will be coming for general release shortly after.