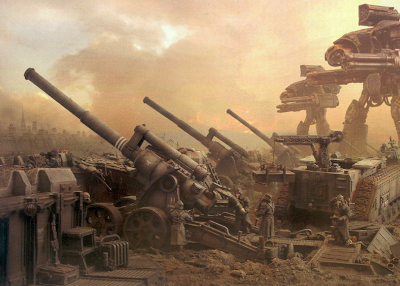 This very much gives Forgeworld models the same level of "official" as does any other product GW releases for Warhammer 40k. In fact this goes so far to say its as official as the Tau codex is for games.

Check out the rest of this below.

Also note the following quote regarding Games Workshop and Forgeworld being the same company.
If you would like a comment on this from a different department within Games Workshop I would suggest you direct your questions to them.

A huge thanks goes out to Father Gabe for not only asking this question in terms but sending it in. (I have included the question so that there is a better understanding of what was asked).

via Father Gabe here on Faeit 212
On 18 November 2013
Good Morning,
I am contacting you regarding an issue that seems to continue to be a hot topic despite the best intentions of Forge World and Games Workshop to address it.  The issue specifically is even though new Imperial Armor books have official "Warhammer 40,000 Approved" stamps on certain models/army lists, they are not widely considered official by your customers.

Large in part now due to Warhammer World listing Forge World units/army lists as unusable in their official tournaments (Like Throne of Skulls), which has, of course thrown the Warhammer 40,000 crowd across the many nations into confusion.

I realize that your staff are nearing the holiday season, working diligently on Horus Heresy, Warhammer Forge, etc., and it is appreciated.  I would however, greatly appreciate a response or addressing of any of these issue that seems to consume customers/fans.


via Forgeworld in response to the email above.
Thank you for your email. Our models and rules are developed for the Warhammer and Warhammer 40,000 universes. We make it clear in our Imperial Armour books, when a units profile has been stamped with a 'Warhammer 40,000' stamp that:

'This unit is intended to be used in 'standard' games of Warhammer 40,000, within the usual limitations of Codex selection and force organisation charts.'

'As with all of our models these should be considered  'official', but owing to the fact they may be unknown to your opponent, it's best to make sure they are happy to play a game using Forge World Models before you start.'

If you would like a comment on this from a different department within Games Workshop I would suggest you direct your questions to them.

If there is anything further we can do to assist you, or if you have any queries about the information we have requested or provided, please telephone us.