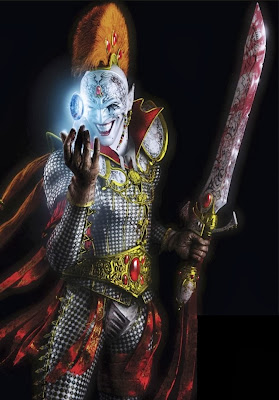 This morning we were talking about the idea of mini-dex's, their origins, development, and finally what they may end up like in the future. Here is some information that may eventually tie into something in the future regarding Harlequin models and a possible mini-dex.

via Stickmonkey on Faeit 212
My info is from a while ago, so obviously it may have changed a lot, but it ties into what you mentioned about a Harlequin codex.  I had info that there was a 10-man plastic box of harlequins being designed to be released I assumed with the next DE book.  The design parameters included the standard options, but the box was also to have bits for a troupe master and solitaire.  Separate from this was plastic blister death jester.  There was also a rumor heard that one designer was working on a harlequin jetbike as a pet project following the new DE jetbike asthetic.

Does any of this hold water, no idea.  It’s been about 9 months, and I’ve heard nothing more on it, so I don’t know.  Probably needs lots of salt, but if we consider the possibility of Harlequins getting a standalone ally dex…maybe there is more to this?
11/26/2013
Natfka
40k, 6th Edition, Rumors, Warhammer 40k