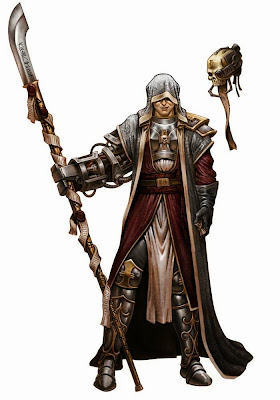 There is a lot of the community that does not like the new Inquisition codex. There are some though, like myself, that absolutely love it. Its been since 5th edition that my Inquisition units could ally up with my Imperial Guard..... which is in my opinion where they should be.

I was disappointed in Grey Knights, simply because I started playing them because of the Inquisition. I already had the Inquisition models, and wanted to keep playing them. Of course don't get me wrong, I loved and still do psycannons.

What this codex did was something that Inquisition players have wanted returned to the game. I can understand that we wanted more, and that non-inquisition players desired something different. However for people who already loved the Inquisition, and missed them being attached to the Imperial Guard, the book is what we hoped for.

Quite simply... If you had asked me if I would buy a book to just get the Inquisition back into my IG I would of said yes.

Access to Inquisitors for so many armies is huge.

What Games Workshop did though was take it one step further. They took the codex and made a new allied system on top of what we already have called an Inquisition Detachment. This in reality allows the Inquisition to be an ally of an ally, and opens up where these guys can go into many different armies.

For the most part it is simple and easy to add in an Inquisitorial Detachment. For as low as 25 points in fact. Then add on some servo skulls and that can be it. If you play any army that can get access to the Inquisition, which is anyone but Orks, Tyranids, Chaos Daemons and Marines, and Necrons, you should be taking a closer look at this codex.

What this codex does is literally change the dynamics of most armies, whether you are playing against it, or with it. So much can be done with them, from their psychic powers, grenades, transports, and more. What Games Workshop did with this codex is add a ton to the game of 40k with very little.

Having played my Grey Knights for the Inquisition now for quite some time, here is how I see each one being used.

All Ordos
Servo-skulls, because anyone playing an imperial army can get these now for the low cost of 25pts of Inquisitor and 3 points there after for each skull.

Psychic Powers. Cheap reliable prescience is the name of this game, along with what ever other options you think you might want. Hammer hand and Psychic Communion are fast and easy winners as well.

In a nutshell, you get some great options for just about any army you want to play with any of the Inquisitors. Now lets take a look at how I have been using some of these guys over the last few years and how that will translate.

Ordo Xenos
The Assault Inquisitor
These guys are the new hotshots in town. They can join other units, and literally be the deciding factor in any assault with their grenads. Have a unit that you want to assault with? Simply grab a single inquisitor with grenades and have him join your squad. Its that easy and extremely valuable.

The Xenos Inquisitor does more though than just load up on grenades, they can take conversion beamers. These are nice, and can just sit in the backfield in a 5 man tactical or other unit and fire away.

Psyk-out Grenades. Dont forget that if you assault any units that are either daemons or psykers, they are reduced to Initiative 1

Plasma Syphon. Yes these are cool, and suck the wind out of those plasma armies, like Tau, the Black Legion, and more. Plasma is cool, and getting the wind sucked out of them, is just evil.

Ordo Hereticus
The search and destroy Inquistor
A largely underrated Inquisitor. These guys excel at turning a good shooting unit into one that can dominate. I have been using an Ordo Hereticus Inquisitor since the Grey Knight codex came out. Lover them. What am I talking about.... the Psyocculum. I have used this to make my psyker large blast template S10 Ap1 into a  Large blast that has a ballastic skill of 10.

Now you can attach these inquisitors to other more rubust units, like Sternguard, Centurions, and much more. Anything that is a psyker will suffer greatly. What do you think of snipers with BS10, Devastators and many other fun options. Dont let psychic powers overwhelm your army.

Ordo Malleus
The in your face, front line Inquisitor
These guys can suit up in Terminator armour, grab a psycannon, and let loose. They really do come with the best weapon options, and the one I have used in the past the most, is the terminator armoured psycannon wielding a Nemesis Daemon hammer.

If you plan on running your inquisitors straight into the battle and jumping into the fray, one of these guys fits the bill. Team him up with a Xenos Inquisitor with grenades, throw them in a land raider and go have some fun.
11/21/2013
Natfka
40k, 6th Edition, Warhammer 40k