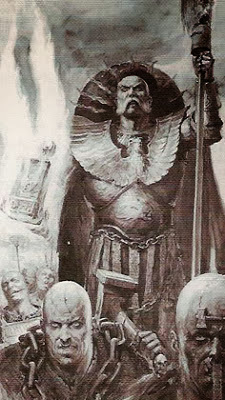 Sigmar's Blood is a December release coming for Warhammer Fantasy that will be up for Pre-Orders this weekend with a release date of December 7th. Exactly what is it?


So I bet you were concerned that we had no rumors for Warhammer Fantasy in December. Well we have one, Sigmar's Blood. Its looks like a story driven supplement to recreate a famous series of battles, where Volkmar the Grim invades Sylvania to battle Mannfred Von Carstein.

Please remember that this is a rumor. Salt is always required.

via an anonymous source on Faeit 212
December Release for Warhammer Fantasy
*Sigmar's Blood is a Fantasy supplement where you can recreate story of Volkmar's invasion of Sylvania
*Each battle contains rules that carry through to the next battle.
*The supplement comes with historical background and large hobby section.
11/27/2013
Natfka
News Headlines, Rumors, Warhammer Fantasy