Stronghold Assault: Something for Everyone? 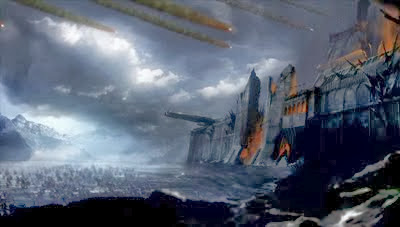 Stronghold Assault is very likely to be popular among the community when its released, as fortifications can practically be used by any army. This will make it a good seller, and something that many of us will want. I do hope that it is planned to release the codex digitally, but nothing has been said about it that yet.

Will Stronghold Assault be a game changer? After all its a $33 codex that can add so much to existing armies. While I have not seen any xenos upgrades, we should find out here shortly if there are any, hopefully tomorrow, as they are available for pre-orders then.


Not to mention there is also a great deal for fortifications in the Holiday bundles, the Tempestus Firebase. This makes inclusion of Fortifications easy to do and with a financial incentive of saving money on a bundle deal.

I think there are great possibilities coming for Stronghold Assault, and there are a few rumors about that give us a little insight to what it is that the codex will contain.

Here are some rumors from Royal on Warseer
It looks like the Wall of Martyrs gives the unit occupying it Stubborn for 40pts. I think you get two of them for that amount.

The Imperial Defense Emplacement gives the unit Stubborn and gives the unit "Wide Arc of Fire" or something like that that allows Heavy Weapons to reroll overwatch shots for 80pts. You can take a few of them for that cost.

All of the pieces are now useable in standard games and you can take "networks" as one choice which are a combination of the pieces.

There is a called Bunker Siege or something like that. The attacker gets +1 Heavy for each Force Org Chart and the Defender gets three pieces of fortifications for each Force Org Chart. There are also two other Siege type missions and I believe more rules for sieges. There was a mention of orbital bombardments or artillery strikes.
11/29/2013
Natfka
40k, 6th Edition, News Headlines, Rumors, Warhammer 40k