A First Look at the Inquisition Codex 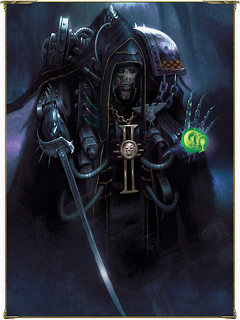 The Inquisition codex is out and now that I have read it from one side to the other it thought it was time to take a look at my thoughts on it. The first and foremost question really is.... should people pick this up and is it worth it?


To answer that, I want to say that have enjoyed reading through it. The book itself reads more like a codex rather than a codex supplement. Meaning there is less of a story line to it than the codex supplements I have read through. That is OK though, since this is not a supplement, but a codex itself.

Is this worth the value of the book. I think so yes. There are some differences in this book to make it worth while from the Grey Knight codex, and I see how using the Inquisition to be extremely valuable on the tabletop. Inquisitorial detachments alone make this worth while.

I think it will be quite common now that this codex is released to see Inquisitors joining up a full myriad of other army lists, because they are just so easy to add in. You still get to take a Primary detachment, allied detachment, and then can add inquisitors without effecting those detachments. Not to mention that these inquisitors are battle brothers, and gain all the benefits of such across so many different armies.

Here is a first look at the Inquisition codex from the Faeit 212 Youtube page.


Now what would I have liked to see different? Of course I would of liked to see a more generic Inquisitor entry in the book. One that allowed people to create their own Ordos or to make Inquisitors from the ones mentioned in the codex (there are lots). Other than that, I think seeing a few more escentric wargear options on the lists would of been fun as well. Just more options.

Otherwise I am happy with the Inquisition and how it will be fielded and played on the tabletop. I think a lot of players will find ways to use the Inquisition into their existing armies.
11/16/2013
Natfka
40k, 6th Edition, Feait 212 Video Productions, News Headlines, Warhammer 40k