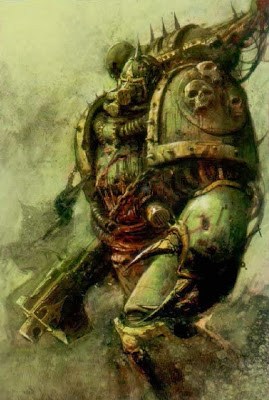 Following the Khorne codex cover leak we had a week ago, there is now a Nurgle Image up on the 4chan showing a Nurgle cover with a few new rules and kit rumors.


Please realize that these are rumors, and that while this is very much probably not real, there is always a chance.

Here is a link to the location and the rumor which has a few new bits added to it, mostly in the Nurlge areas.

via leakshop on 4chan
http://boards.4chan.org/tg/res/28560537
I have new information and clarification from my Source

Khorne supplement DIGITAL in JANUARY
Can Ally with Demons or CSM

-Champions of Khorne (Berzerkers with +1 on A and Ld )
-They have “Butcher´s Nails” rule which gives 6++ & FNP BUT ONLY after “spilling Blood” (killing enemy Model in CC) and only in CC.
-22 Points each, can take Melee and Ranged Weapons
-Can take Juggernaut of Khorne for extra 30 Points each
-Or Terminator Armor for 25 Points each
-One Model can be upgraded to a Khorne Lord of Skulls with +1 to WS and Ld
-Champion Squads are an Elite choice

-Berzerkers are Troops
-Can take CSM-pods for 45 points. Other CSM units don´t get this option. (like SM pods, except that they do damage instead of scattering when landing on top of enemy units) Str. 4 AP- Blast 5” move remaining models out of the way

-Lord of Skulls is in (Apoc only)
Digital Nurgle Supplement is scheduled for March
- Warlordtraits, Wargear, Missions
-3 new units

Models will be released in April along with the Printed Version of the Supplements.
Tzeentch and Slaanesh are supposed to follow with their own wave later in the year.

Here is the link to our post here up on Faeit 212 regarding the subject of the Khorne leak.
http://natfka.blogspot.com/2013/11/khorne-codex-supplement-with-cover-art.html
11/29/2013
Natfka
40k, 6th Edition, Chaos Daemons, Chaos Space Marines, Rumors, Warhammer 40k