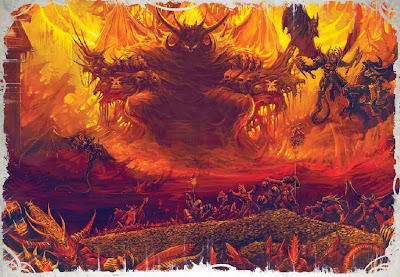 There are rumors of a new Khorne Codex supplement and one for Nurgle as well. This one is a little salty but does come with a codex cover which can be traced back to the Deviant Art site by MikhailSavier. This makes the rumor even less likely, but take it for what it is.

Please remember that these are rumors. This just might be loaded up with salt. However, we are rumored to get specific God Codices later next year, Tzeentch is supposed to be first.

Here is a link to the original artwork by Mikhail Savier (which rocks btw). You can see the rumored cover on the 4chan link.
http://1mpact.deviantart.com/art/Bers-370495987

Also a big thanks to James who did the leg work on this one.
here is another link to the information over on Heresy Online with pics
http://www.heresy-online.net/forums/showthread.php?t=130363

via 4chan by Leakshop
http://boards.4chan.org/tg/res/28432685
Khorne Dex
Can Ally with Demons or CSM