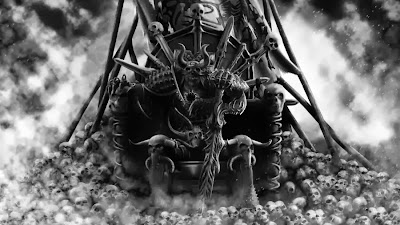 The latest Throne of Skulls has come and gone, and in its wake, rumors and innuendos about a new Warriors Code coming in 2014. This new Warriors Code which was apparently used in this last tournament at Warhammer World resulted in some harsh decisions on what was playable, from paint schemes to conversions.

So what is this Warrior's Code?


Here is the link to the latest Warriors Code so that you can read it yourself. While personally I feel that touranments should be rather strick on conversions for advantages, and army switching to be the latest and greatest, is this what we want for tournaments?

Really the question comes down to it though on whether or not we as a hobby would like a set of sanctioned rules for tournaments. I think many people would, but would that be too limited for the wide variety of events we have currently?
11/13/2013
Natfka
40k, 6th Edition, Events, Warhammer 40k