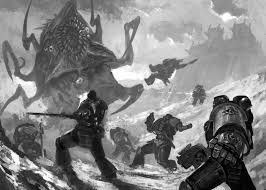 Tyranids are not that far away now, as they are rumored to be available for pre-orders at the end of December. With that we have more rumors of new models coming for Zoanthropes, in a new multi-part plastic set. So check out the latest information on the beasts that will start off your new year with a bang.

via Larry Vela on Bols
We rate these possible, coming from mixed sources
Zoanthropes
-Multipart plastic kit makes 3 models.
-Flying bases.
-3 base bodies in the kit, 2 tails are coiled, one is curling slightly forward.
-Back plates and chests are identical for the three. These are wider and slightly taller than the current model. The base tail piece has 2 tiny claws that go on, but are not normal Tyranid ball sockets. The torso has 4 arm sockets. For these models the claw arms are similar to hormagaunt claws, but shorter. Kit contains a dozen arms, most are retracted, four are extended out. All are small atrophied limbs compared to other Tyranids. Two rows of back-vents.
- Multipart heads. There are separate pieces per head to make the mouths have more dimension. One has its tongue out, curling to the side. One closed mouth, one mouth is wide open. The head plate is wider and has a spiked ridge. The brains are exposed, no eyes.
-Tail loses the current model's spiked end.
-Slightly larger than the current model.
-Fundamentally an evolutionary kit from the current Zoanthrope to meet the requirements of injected plastic production.
Full Tyranid Rumor Roundup

~Hmm, so this set of descriptions is ONLY for the zoanthrope, but I'm betting there is an alternative critter in that kit. Venomthrope maybe - or something entirely new?