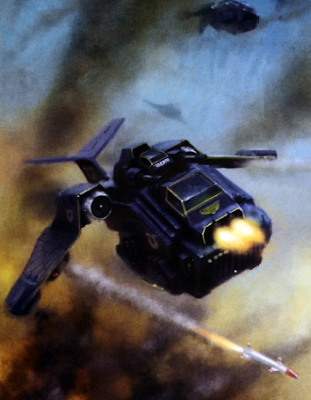 Once again on recovery mode after a more games that I hosted over Saturday night. Two tables set up with 40k games of 1850pts went on all night. Of course there was some tough games, some blow outs, and one of the toughest games I have been involved with ever.


Vendetta Folley
I cannot tell you how many times the Vendetta has failed me in games, both singly and fielded in pairs. I would say it is frustrating, but that would not fully explain my frustration with this vehicle.

Yes, I know that conventional wisdom is that this vehicle is severely undercosted, but is it really? Because according to my games...... and we are talking a lot of games, my Vendettas have not proven themselves worth the point cost they are at.

Dont believe me? Case in point: Two vendettas pointed straight at a squad of damaged Tau suits, with clear shots. 6 twin-linked lascannons fire off.... note that I only need three hits to wipe them off the board. Out of the 6 shots, I end up hitting with two....... wait for it..... no wounds. Yea, I know, the dice gods were not pulling their weight, but when they constantly dont with a unit, is it really the dice? I understand you will claim that this is rare, after all numbers are numbers. However looking past the numbers, they underperform every game, consistently. My expectations are just to come close (and not even reach) averages.

So is the Vendetta worth its 130pts........ Not in the years I have played them. (I think when they first came out, they seemed to do well, but have not since, especially in 6th). 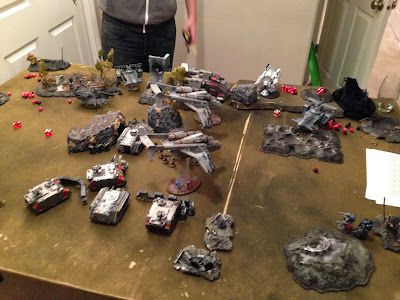 Holy Smokes. I have never had such a ridiculously close game as this one. Quite literally the first Two Rounds of this game, the Taudar were ripping me to bits. Anything he touched with a gun, exploded or was wiped out to a man. After all Tau are Tau, and when combined with Wave Serpents, there is a lot of crap coming my way.

I was fielding one of my extremely heavy mech lists, against some of the things you would expect out of a 1850pt list of Tau. Lots of skyfire, some interceptor, Riptides, lots of crazy suit shooting, and marker lights to mess with your mind. Like you would expect when the Tau got the first round, it was ugly, vehicle after vehicle were going bye bye fast. The first two and a half rounds, were just devestating, and to be honest, it appeared that the game would was over.

Then came in the Storm Raven. Not just any stormraven, but a Grey Knight psybolt ammo fed Stormraven, followed by two vendettas (who missed everything when they came in... see above). Yes, I was fielding a Coteaz Inquisition list with Imperial Guard allies.

In the first 2 rounds, I had immobilized 3 out of 4 dangerous terrain rolls I had to make. (which just killed my forward mobility). Since we were playing number 6 mission "The Relic", and things were dying so fast, I just threw my tanks forward around the relic.

Quite literally tanks were being ripped apart, until finally my Reserves came in at the bottom of the 3rd round. Nothing says hello like a Grey Knight Storm Raven, and ripped hard into the suits, while psybacks had eliminated a majority of marker lights early game.

With the arrival of the Storm Raven, the game had suddenly changed. Suddenly he lost a Wave Serpent, The suits were all being gunned down, and what remained of the Grey Knight Inquistion and Imperial Guard were suddenly giving it all in the middle of the board.

Round 5 came and went. At the bottom of the round, I was holding the objective, but the game would not relent, and quickly my infantry were getting gunned down, but I had more. The game continued...

With the last remenents of my forces holding the objective, it was going to come down to a single die roll. 1-3 the game ended, and the Grey Knights were to pull off the victory of the century, and 4-6 the game would continue and the last bits of infantry would be gone, leaving the objective stranded in the middle of the board, and the Tau winning with a first blood victory point.

It was a 6, Game to the Tau. Final Score Taudar 1, Grey Knight Inquisitorial Armoured Company 0

Both forces had been beaten to a pulp, and the amount of firepower and bloodshed was tremendous. The game had simply come down to a single dice roll with a 50-50 chance of either side taking home the win.

Just too much fun. 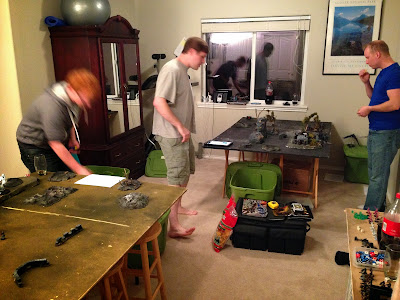 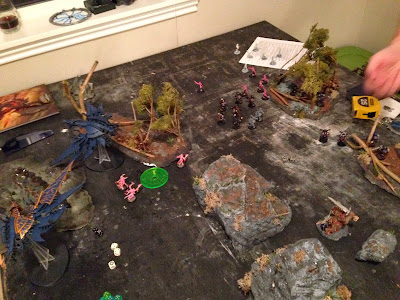 Site Work Going On
As you may have guessed, the move off of blogspot has basically stalled into nothing. However, there are changes coming to the site, and these have already started. I have some help in these changes, including making the site more efficient, and more professional looking. So expect some changes over the next few weeks here on the site.

Also, you may notice more articles and news as well coming at a much more regular pace. This is simply because I am going to be able to dedicate more time to the site, and plan on taking the site to the next level. So be prepared that there will be some visual changes, more community support, and improvements going on.
10/20/2013
Natfka
Presence of Faeit