Revealing the Future of the 40k Inquisition 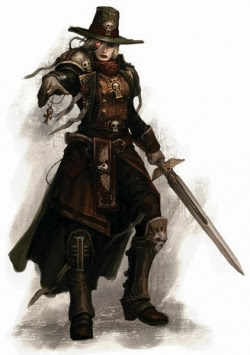 There is a burning question going on right now in the community, and that is in regards to what happened to Inquisitors alongside the Sister's of Battle. After all they were present in the Witch Hunters codex, but the Ordos Hereticus is currently is in the 5th edition Grey Knight codex.


Here is an answer.

Of course this brings to a lot of cool speculation on the future, and the possibility of an Inquisition codex. Something I would be dying for, almost quite literally. Yes, its time to start my First Space Marine army, to ally up with my current Grey Knights and Imperial Guard armies. GW, you just roped me into a new army.

The Question to Forgeworld
I had a question concerning the newly released PDF for "SPACE MARINE CHAPTER TACTICS FOR SIXTH EDITION WARHAMMER 40,000".

For the section that addresses the Red Hunters on the that states the following:
"By this Seal: When using the Allies Matrix, all models in
the Red Hunters detachment count units from Codex: Grey
Knights and Sisters of Battle as Battle Brothers so long as an
Inquisitor is also present in the allied detachment."

Sisters of Battle (now known as Adeptus Sororitas as in the new codex release) no longer have an inquisitor in their codex and haven't since they were part of the Witch Hunters codex. Can you please clarify how a sisters of battle/adeptus sororitas is suppose to be able to take the Red Hunters as allies if they cannot take an inquisitor in their army list?


The Response via Forge World
Thank you for your email.  The Chapter Tactics update is fully up to date with the current codex's and is in fact future proofed.  All we can say is that it is correct and the Red Hunters Chapter Tactics will make sense at a later date.