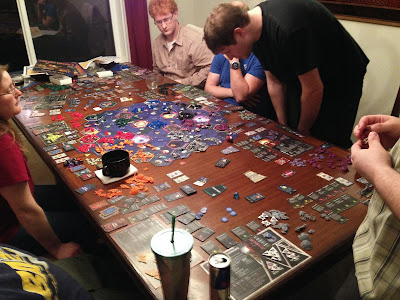 If you have never seen a board this full for a board game, then you just have not seen Twilight Imperium played. This game, while in my opinion one of the greatest board games there is, just consumes a ton of space, but keeps the action going all night.


With that said, we had a 7 player game that went late into the early morning hours, so give me a few hours sleep before I can wrap up the rest of the days posts. Oh yea, I did not win tonight, although it was a nail biter all the way into the last couple rounds of the game. If you have not tried this game, I highly suggest checking it out. Fantasy Flight Games makes it, and can be found on their website. 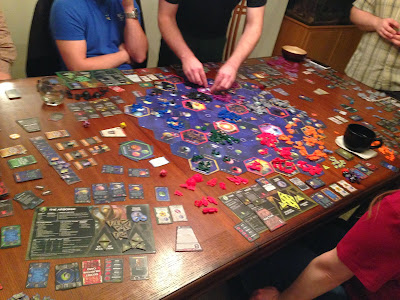 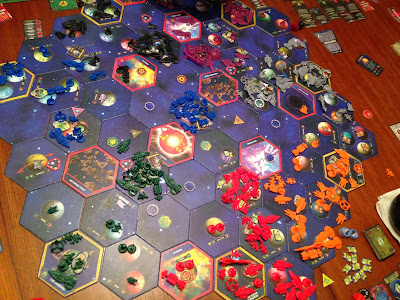 If you are not sure what the game is, its one of the most intensive rulesets for a board game I have run across. It can be time consuming if you are do not have the rules down, and keep the game moving. We generally start about 8:30pm and wrap up at 3:00am. Of course we have had games last a little longer or shorter, even a just after midnight wrap up. Its also interesting to note, that I have found that playing with 4 players takes much longer than it does with 6. Eight or six is ideal for the game, and still beats the 4 player game.

The one thing you need to play this game, besides the game itself, players and the time, is a lot of room. This games takes up a large size table rather quickly. It will fill your table quickly. Just check out the table I am getting ready for it now, and yes this table will get crowded fast. What you cannot see, is that a lot of the essentials for the game set up are on a different table behind me, just to keep the game area clear of unneeded things.

via Fantasy Flight Games
http://www.fantasyflightgames.com/edge_minisite.asp?eidm=21
Twilight Imperium is an epic board game of galactic conquest for 3-6 players. Taking on the role of one of ten ancient civilizations, players compete for interstellar supremacy through warfare, trade, uncertain allegiances, and political dominance. Each civilization provides a unique game experience with different abilities and play styles. Will you play as the Emirates of Hacan and preside over every trade agreement made in the galaxy, or will you be the Federation of Sol and rapidly take over worlds in hopes of dominating the entire galaxy? In Twilight Imperium many roads lead to Rome (or Mecatol Rex), but no road is without its bumps.

Of course we have both expansions, so there are up to 8 players, choosing from 17 different races, and a myriad of game playing options. Of course political intrique in this game is deadly, as is some of the Galatic Council Meetings. So once again, I will be building planetary refineries, working on my capital ship and technologies, laying down the mines along my borders, and seeing if I can pull off another good game of Twilight Imperium.
10/27/2013
Natfka