Busting the Myth: The Death of Armour 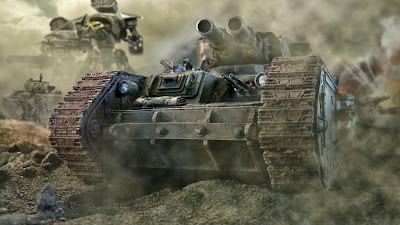 6th edition brought in the wholesale slaughter of Armour in 40k, literally everyone (well many) who was busy armouring up to be a full mechanized force suddenly halted in their tracks immediately and began changing over to infantry. What was the cause of this shift? Hull Points.

I don't buy it. I have not stopped playing mechanized forces, from the extreme levels to mech hybrid armies, the pros for fielding armour on the field are just too great to be ignored. Instead what I think happened, is that all the players looking for the easy win found armour the playing field leveled. Those players quickly moved away from all mech, to all flyers and infantry, looking to continue their advantage.


I have stayed playing heavy ground based mech since 6th edition came about. Yes, tanks cannot withstand 3-6 rounds of continuous hits and somehow survive. Lets be honest, that was a little bit ridiculous back in 5th. Now we have more strength 6 and 7 weapons on the field, nasty guns like grav guns mean for ripping apart monstrous creatures and tearing up infantry and breaking cover saves.

So why take a look at your old mechanized forces... Where are their strengths.

Mobility
6th edition has not changed in the facts that we still need a ton of mobility in the game. In fact, we need it even more than ever before. 6th edition changed how objectives are deployed (after board edges are chosen) which is my only real serious complaint about 6th edition. Objectives are now more than ever very close to your opponents board edge, and you MUST be able to break his line, and reach them.

Armour is literally the best way at punching your troops forward into their lines. While Meltas still exist, the opposing field is not always literally covered with them everywhere. While there are other forms of fast and quick movement forward, only mechanized armies can do so with such force.

Opposing Forces
6th edition brought us additional firepower for our armies in many forms. The most notable has been the increase of S6 and S7 firepower. From Plasma Guns able to move 6" and fire 24", to an increase in autocannon strength weaponry, these guns are everywhere now. Monstrous Creatures are generally T6, so these high strength low AP guns are necessary. Tanks however handle them just as well as monstrous creatures, and often better.

With literally more people concentrating more firepower towards infantry and breaking cover, my armour count in lists has been increasing. After all armies must be able to take out IG 2+ cover save armies behind those aegis defense lines, and the amount of firepower needed to take down my tanks has fallen drastically.

Even though Leman Russ's for example is in need of an update, but 6 armour 14 vehicles would shock many armies (even Tau, who have somehow fallen into less S10guns on the tabletop) into submission.

Firepower
The firepower of tanks has not increased on paper, but it has in application on the tabletop. No longer do glances damage your tanks, and reduce your firepower. Even a stun or shaken result still allow you to shoot those tanks at something with snap fire.

Also something to think about for all those assault horde armies that can wipe out whole phalanxes of tanks in a single rush....... Ever assaulted a tank with a fire port and 4 flamers? Yea, my IG platoon command often lead the way nowadays into those hordes, and while that tank will go down eventually, it clears out a path for my forces through the mess. Not to mention that this often causes assaults to fail.


Conclusion
There are many strengths to fielding armour, and yes, I just love all my chimeras, rhinos/razorbacks, and more. Tanks are still the often the mainstay of my armies, and its rare for them to fail me.
10/16/2013
Natfka
40k, 6th Edition, Warhammer 40k