The Fate of the Dreadnought 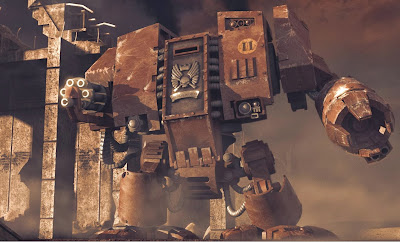 With the new Space Marine codex, and more specifically the Iron Hands Chapter tactics, a lot of us have started looking back at one of the almost dead units in the game, the Dreadnought. Before we do this though, we have to take a look at what happened to it in the first place....


Dreadnoughts are fun, and draw up an image of 40k that we all just love. One of my favorites is this little opening from Dawn of War when the Dreadnought comes out and just lays down a hail of fire into the charging Orcs.

While I am a big fan of the Dreadnought, the model itself has gone by the wayside, especially the close combat Dreadnought. Yes, I know we can orient our lists to include them, but for the most part they are not in many lists anymore.

To top it off, the dreadnought only has two attacks. So monstrous creatures will rip it apart quickly, guardsmen will down it, so the only thing to do with the dread is keep them back shooting. Which means you had might as well get a tank.

With Iron Hands chapter tactics, many of us have looked once again at the dreadnought. Venerable with it will not die, a Master of the Forge, and an allied dark angel with a powerfield generator is just cool.

Now that is a lot of work to pump into your dread, but fielded in twos or threes, you can really layer these beasts, but is all that worth it? Maybe. I love this idea and have been playing around with it for weeks now, but have not found a sweet spot yet to justify it enough for hitting the table.

While I love dreadnoughts, I still feel they are just lacking the respect that they once had. Yes they are much cheaper than they once were. I just want more out of it. Not out of needing to wipe people off the table with them, but wanting that mystique back, that "Oh, I have to be careful getting into those front lines, because of a dreadnought or two".

I truly miss grenades only being able to hit a walker in close combat on a 6. I really think that if this was done, and if you had a dreadnought close combat weapon dealt two wounds for everyone one delivered, you might see the return of these enigmatic walkers. But this is the age of Monstrous Creatures, not the lowly Dreadnought.
10/25/2013
Natfka
40k, 6th Edition, Space Marines, Warhammer 40k