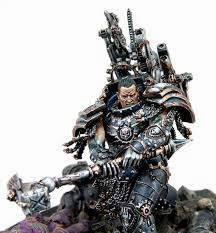 Forgeworld has a couple new releases coming that were already sold during Games Day UK. The rest of waiting for general releases are finally getting our chances at the new Ferrus Manus model, and possibly the Iron Hands Squad.


This is still considered a rumor, and should end up with something official from Forgeworld very soon.

via RevEv over on Warseer
While visiting Warhammer World yesterday I asked about When Ferrus Manus would be released. Apparently they are expecting preorders in the next couple of weeks. This is backed up by an email I received after an enquiry to Forge World that puts expected release dates about the end of October/ beginning of November.

via Faluna over on Warseer
I emailed FW about the release of the iron hands squad, and they replied that it would be up for pre-order along with Ferrus Manus early November - so I suppose either this week or next.
10/28/2013
Natfka
40k, 6th Edition, News Headlines, Rumors, Warhammer 40k