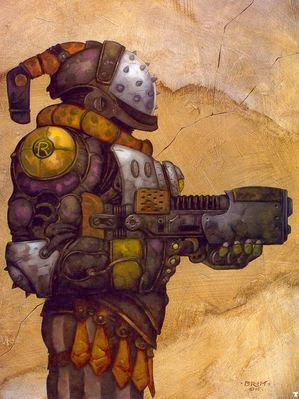 Its been awhile since we had any rumors floating around for Dark Age. And then this..... Now I need to start a Saint Mark faction. Ok Luke may be my favorite of the Forsaken, but Mark has a Dragon, how can you beat that?


Speaking of which, I need to get the new core rulebook as well. At least two tables being set up for Saturday's Games here, Hopefully we can get some Dark Age in.

This is one game, that I feel like I keep having to introduce people to. Its a hidden gem, with cool models, artwork and gameplay.
Abandoned in the collapse of their star-spanning empire the humans of Samaria must battle for survival; against each other, the monsters they have created and the harsh planet itself. This is no place for weakness, only through courage and determination can a man hope to endure in the savage wasteland.

Dark Age is a gritty, D20 driven, post-apocalyptic skirmish miniatures game for your tabletop. The game contains rules that are easy to learn and get you into the action right away. You can tailor how you play your game by Activation Points and alternate activations. The game is illustrated by a number of top artists including the inimitable Brom; the world of Samaria is brought to life as never before.
Follow the link for more about Dark Age Games. http://dark-age.com/index.php

Please remember that these are rumors, a little salt is always required

via an anonymous source on Faeit 212
I don’t think it’s any secret the new Dark Age book will feature the Forsaken (more than likely The Prevailers, given the back of Conflagration), but word is that it will also feature the Salt Nomads, which had some concept art pieces floating around last year, but we never saw anything come of them.

we may see mounts in this book- along the lines of Saint Mark’s DRAGON and Saint John’s GRIFFEN!