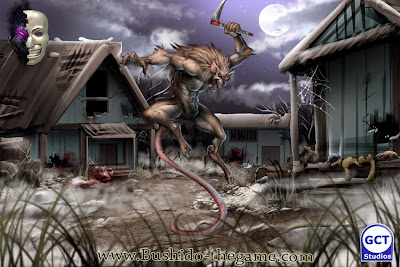 Bushido has some new concept art for its Wave 15 coming in December. The first is for the Cult of Yurei, while the second is the temple of Ro-Kan (one of my favorite factions in the backstory of the game). Bushido is a game of heroes set in a an Oriental Fantasy setting. So check out the latest.....


Personally I always like the models much more than the concept art, but this does give us a good idea of what is on its way.

Nezumi Kun - Cult of Yurei
Little is known about the origins of Nezumi Kun, even the scholars of the Blue library could only guess at the occult rituals and black magic used to create this “Son of Nezumi”. The savage Yokai appears more wild and feral than its “father”, striking from nowhere, only a rank stench left to mark its passage before it scuttles away into the darkness. Waiting and lurking in the shadows waiting for instruction from a faceless unseen evil. 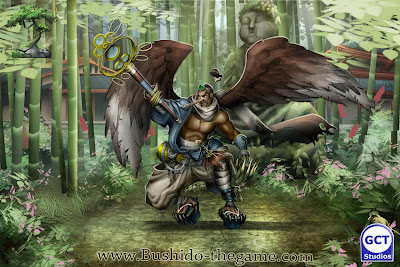 Sojobo - Temple of Ro-Kan
The martial skills of the Tengu are legendary across the Golden Empire. Although few in number the avian Yokais long lives give them ample time to gain mastery of not only the martial but also learn the secrets of the kami who call the mountains their home. Hidden away in their mountain top cities and guarded by the devoted hill tribes few have ever seen these mysterious warriors. What has brought Sojobo down from the mountains and to the aid of the Tengu’s old allies the Temple is not known. Sojobo’s skills in combat are equalled by very few. Now he has spread his great wings and left his mountain home the spirits and prospects of the people of the Ro-Kan can only be lifted as a result.