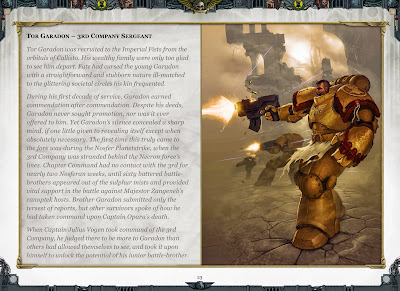 The first Space Marine codex supplement to be released are the Sentinels of Terra, the Imperial Fists 3rd Company. Its going to be released soon digitally, and Eddie from the Games Workshop Digital is giving us a sneak preview of the Companies background. So take a look at the image which is a released image from the GW digital editions facebook page

Of course I will be waiting for the print copy of this to come out before picking it up, but its exciting none-the-less that the first of the space marine supplements is about to go live.

Also notice that there are rules for using Sergeant Garadon in your games.

via Games Workshop Digital Editions Facebook
This book will focus on the glorious history of the 3rd Company of the Imperial Fists, and is packed with new background, rules, artwork, missions and all that good stuff.

One of their great champions at the close of the 41st Millennium is the heroic Sergeant Garadon.
We thought we’d give you a little preview of his back-story.

The new book contains all the rules to let you use this loyal Imperial Fists hero in your games.