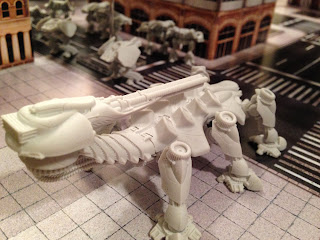 The PHR or Post Human Republic are the biggest sellers of Dropzone Commander in the United States. They just have awesome walkers that are able to stride into the thickest of battle zones and duke it out with just about anyone. They look good, play awesome, so its no wonder they are top sellers.

Well a friend of mine just received his Mega Force purchase of PHR, alongside a pack of each of the new experimentals.... yea, they are awesome. So here is a quick video to check out the models, and see what they are. We were setting up for a game, so they were not staged well for the video, sorry. Later I will get into a battle report on just how cool they are.