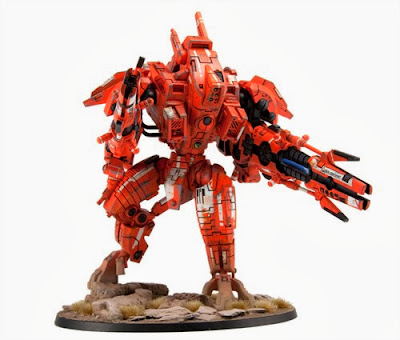 New from Forgeworld this morning is the new XV107 R'varna battlesuit, a massive Riptide Variant shown above. To match that, its all Tau this week for Forgeworld for some new bundles.... and of course some Death Korps of Krieg. So check out the latest from Forgeworld.

via Forgeworld from Newsletter 367
A development of the Riptide, the the Tau XV107 R’varna battlesuit sacrifices mobility for heavier armour and increased firepower in the form of two pulse submunition cannon, experimental weapons systems which fire micro-cluster projectiles capable of saturating the target area in a deadly storm of plasma pulses. The stoic Earth caste of Ke'lshan was almost forced to abandon its plans for developing the R'varna battlesuit due to the monumental cost of these new war engines. Instead Fio'O Ke'lshan Sho'Aun turned to the Ethereal Council's demands for improved stealth and infiltration units, appropriating resources intended for this project to create the initial prototype units under the guise of creating a new Stealth Suit. Renewed Tyranid attacks against the beleaguered sept world of Ke'lshan were to reveal O'Sho'aun's deception to the Council, as the trio of prototype units held back the savage host of organic nightmares that threatened to engulf the Sept's primary city. The XV107 R'varna battlesuit, designed by Daren Parrwood, is a complete multi-part resin and plastic kit. This model is vailable to pre-order now and will be despatched from Thursday October 31st. Experimental rules for the Tau R'varna can be found here. 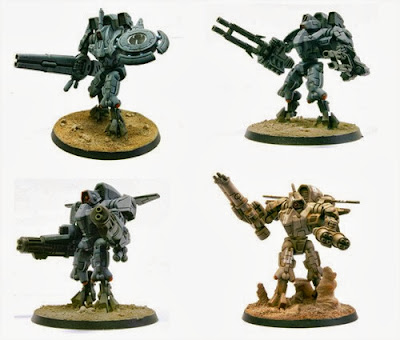 The Fire caste of Ke’lshan has mastered the use of the XV9, and within this cadre of solemn and determined warriors Shas’o R’alai is a paragon amongst veterans; his skills having been rewarded with the most advanced weapons and equipment produced by the Earth caste.
The Shas'o R'alai Command Echelon Cadre is a new bundle set that includes Tau Battlesuit Commander Shas’o R’alai, an XV9 with Twin-linked Burst Cannon, an XV9 with Phased Ion Cannon and an XV9 with Fusion Cascade.
10/11/2013
Natfka
Forgeworld