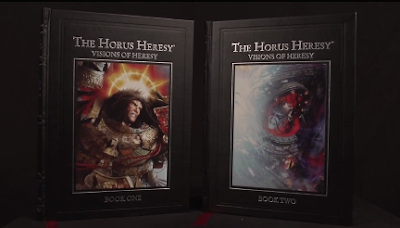 Visions of Heresy is a dual volume limited release that incorporates the entire history of the Horus Heresy, compiled from over 20 years of writings. It includes artwork from Neil Roberts, and much more. This is one of those editions that I would really like to get a hold of.


Here is the link to find out more, and check out the full video of what these collectors editions are.
http://www.blacklibrary.com/horus-heresy/visions-of-heresy-collectors-edition.html

via the Black Library
THE STORY
Always first among the superhuman primarchs, the newly dubbed Warmaster Horus turned his back upon the Emperor and embraced the dark powers of Chaos. With fully half the military might of the fledgling Imperium at his command, he set his sights upon the throne of Holy Terra and waged a war which would divide the galaxy forever...

Visions of war, visions of darkness, of treachery and death - all of this and more is contained within this heretical volume. Iconic depictions of the Space Marine Legions and the heroes that commanded them are presented alongside artwork from renowned artist Neil Roberts, as well as brand new historical notes on the Warhammer 40,000 universe by Alan Merrett. Witness the end of an era and the beginning of something far darker, as the Heresy continues to unfold.

ABOUT THIS EDITION
This collector's edition comes split into two volumes: The Age of The Emperor - Istvaan V and The Silent War - Terra. These leather-bound hardbacks are presented in a leather slip case featuring Neil Roberts new interpretation of the Emperor's fateful battle with Horus on the Vengeful Spirit.

Strictly limited to 1,250 copies worldwide, this tome is something no collector will want to be without.

Visions of Heresy will go on sale at 9AM (BST) on 1 November and is only available while stocks last.
10/18/2013
Natfka
Black Library, News Headlines