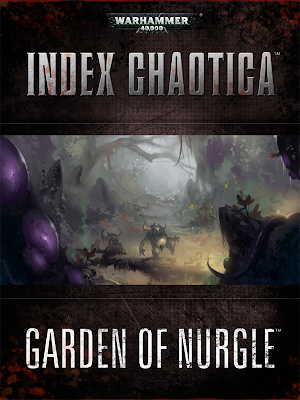 Games Workshop has several series of digital releases that are small booklets for digital releases, and Index Chaotica is the latest, and one that catches my direct interest. Warhammer has one of the most extensive and detailed backgrounds of any game alive, without question. So when we start delving deeper into the Chaos Gods, of course we will be listening.


Just to take a quick look at todays releases, there are three.
Garden of Nurgle: Index Chaotica
Rail Rifles: Munitorium
Ahriman: Warlords
Here is a link to check them out in more detail
http://www.blacklibrary.com/games-workshop-digital-editions

via Games Workshop Digital Editions
The Plague Father’s realm within the Warp includes the nauseating putrescent of the Garden of Nurgle. A tangled forest of noxious plants and rotting souls the garden is crisscrossed with winding paths and stinking bogs, each one leading to another terrible part of Nurgle’s personal domain.

About This Series:
Though the Chaos Space Marines were once heroic defenders of Mankind, each has sold his allegiance to the Dark Gods in return for surreal and twisted powers. The Index Chaotica series explores their fall from grace, their fell abilities and their bloodthirsty wars, along with the violent champions that lead them in their search for eternal glory.


Possibilites
I have been following these small releases for quite a awhile now, mostly just as a curiosity, and some of them really do peak my interest. I have not yet taken the jump to get any of them, but mostly because I am a print version/hardcover kind of person. I do have the latest updates on the psychic powers app because its fun to play the game with the app, but the jump to the misc digital releases I have yet to do.

I have been waiting to hear rumor bits about this, and since I have not, it was time to jump ahead and talk about what I think we will see. So just as warning, I have not heard rumors about this.... this is my own personal expectations and thoughts.

Hardcover Books that cover these series. I think we will see these series, such as the Index Chaotica reach hardcover. Down the road when there are enough of them released, to some sort of completion, I think we will get hardcover full books on many of these series. Many of them seem like they are just too specific to really be worth printing, but add them all together into a larger book?, and I think there might be some sales to it.

One of the primary reasons I see new players saying. "I am going to start Warhammer 40k" versus another system, is the detailed and rich backstory the game has. Games Workshop printing these out, even if its just a collectors edition book, would be something many of us in the hobby would like to have in our library.