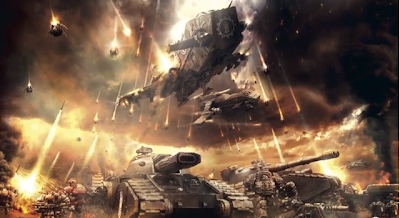 The Horus Heresy Book 2 Massacre's release date is on Friday, the 18th, but you are able to place your orders today! So with the book only a few days out, it is time to do some coverage on just what this book is, and then afterwards take a look at some of its contents. After all these books are amazing, and I would imagine some of the best sellers Forgeworld has ever seen for good reason.

Did I mention there are a couple new releases as well from Forgeworld today?

Being a huge fan of the Word Bearers, this release of the Horus Heresy book and the Ashen Circle have taking a close look at todays releases.

The Horus Heresy Book 2 Massacre
via Forgeworld
Word of Horus’ treachery escapes Isstvan III and now the Legions loyal to the Emperor mobilise to make Horus and those who follow account for their crimes. However the depth of the betrayal is yet to be revealed.

The Horus Heresy Book Two - Massacre is lavishly illustrated in full colour and contains the dark deeds leading up to the terrible slaughter that unfolded during the Isstvan V Dropsite Massacre. Also detailed are the histories of the four legions that took part: The Iron Hands, Salamanders, Night Lords and Word Bearers, and an extensive campaign system so you can play out the battles on the tabletop. This book also contains additional entries for the Space Marine Legion Crusade Army list presented in The Horus Heresy Book One – Betrayal, as well as games rules for the Primarchs of the four newly described Legions, super-heavy vehicles and special characters featured in the story.

Also new from Forgeworld Today
Also new today alongside the Horus Heresy book 2 going up for sale, two new units the Ashen Circle and Kakophoni are listed under new releases for Forgeworld. To check them out closer just follow the link to Forgeworld.
http://www.forgeworld.co.uk/New_Stuff

Serving alongside the Destroyers of the Word Bearers Legion, the Ashen Circle was a unique formation created for a unique purpose; the destruction of culture, learning and faith. These Space Marines were iconoclasts, charged beyond the battlefield with hunting down works of false doctrine and those who purveyed it, consigning both to destruction and eradicating flame.

One of the first malignant tools made manifest in the Emperor's Children Legion after the Horus Heresy were the strange and experimental psycho-sonic weapons that would come to be known as the Cacophony or ‘Kakophoni’ in the ancient form. They were savagely powerful but also dangerously unpredictable in their first incarnations.
10/16/2013
Natfka
Forgeworld