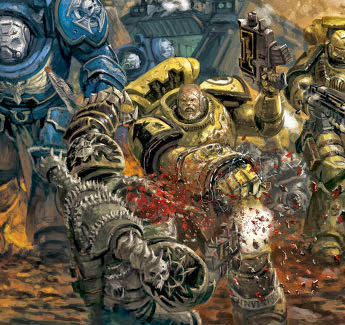 
Today we get to take a brief look at the Warlord Traits and Sergeant Garadon.

Please remember that until release, these are still considered to be rumors.

Sentinels of Terra New Character
Segeant Garadon is equipped with power armor, a power fist, frag grenades, krak grenades and the Spartean(Its a Relic of the 3rd Company).

Warlord Traits table
1. Siege Lord: Your Warlord, and his unit add a +1 to the result when rolling on the Building Damage Table.
2. Tenacious Opponent: Your Warlord has the It will not Die special rule.
3. Wise Commander: Whilst your Warlord is alive, you can choose to add or subtract one from any of your Reserve Rolls(state which before the dice is rolled)
4. Indomitable: If your warlord and his unit do not move in their Movement phase, then he and his unit has Fearless and Counter-attack special rules until the start of their next turn.
5. Architect of War: Whilst your Warlord is embarked inside a building, all damage rolls against that building suffer a -1 penalty, to a minimum of 1.
6. Fleet Commander: Once per game, your Warlord can call down an orbital strike in his Shooting phase. This counts as firing a ranged weapon with the profile below. Range: Infinite, S: 10, AP: 1, Ordnance 1, Barrage, Large Blast, Orbital. Orbital: If an arrow is rolled on the scatter dice, the blast marker scatters the full 2D6" - the Warlord's Ballistic Kill makes no difference.