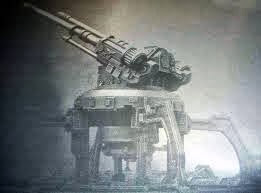 Fortifications hit 6th edition with a bang upon its release. Instantly Aegis Defense lines were everywhere, and still today we see them in a good percentage of lists. Until now though, updates and new fortifications have been virtually non-existent with the exception of the Apocalypse releases which included some 40k rules in the box.


So now we have rumors of a large expansion into fortifications, including racial versions of the existing ones, and a supplement/expansion that will cover it. Months ago, we had something along those lines was in the early works, with a loose estimated timeframe of before or during summer 2014.

Whispers of this expansion have been appearing now and then, and finally something that looks a little more solid has run across my desk. A fortification supplement, something we have been really wanting to see as a community, and something that I would be picking up myself.

Please remember that these are rumors, and according to this rumor, the supplement is still in the works.

via an anonymous source on Faeit 212
there's a supplement that's divided by race with new fortifications and also new racial upgrades to specific fortifications.

The book will have the rules for all the currently released fortifications plus a couple new ones (with models) and then as mentioned rules for racial upgrades.
10/24/2013
Natfka
40k, 6th Edition, Rumors, Warhammer 40k