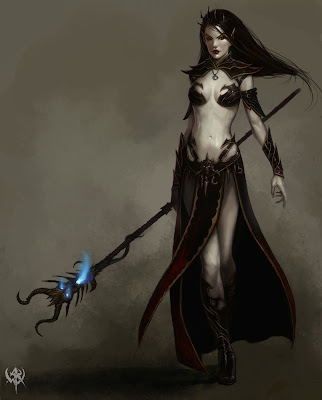 According to this rumor bit, there was some missing information from the last post about Dark Elves from 40k radio. Specifically I was told that the character releases were left out. So lets take a look at what is being said.


First off lets go over what was said from 40k radio

Earlier release rumors via 40k radio, posted up at the link
http://natfka.blogspot.com/2013/09/a-dark-october-dark-elves.html#more
via 40kRadio
The Dark Elves will be out in October with a slew of new models:


This will be a huge release and the Dark Elves will be the best looking Fantasy army, IMHO. These models are breathe taking and Dark Elf fans will have their minds blown!


In Response to the 40k Radio Rumors, one of our sources chimed in to verify the rumor.

via an anonymous source on Faeit 212
the Dark Elf Rumors‏ are accurate, save for a spelling.

New Rumors about Character Releases
via Monkeybusiness on Faeit 212
Most of these characters are missing from that list. Only adding. Guys on 40k radio are pretty close from the real launch.
I've just seen the news about DE but I've found they missed some of the new possible characters...
Plastic Khaine Character
Plastic new Assasin Shadowblade
Plastic kit for Admiral of the Dark Fleet
Plastic kit Executioners Special Character
9/06/2013
Natfka
Dark Elves, Rumors, Warhammer Fantasy