Dark Elf Rules and Pics from the Army Book Abound 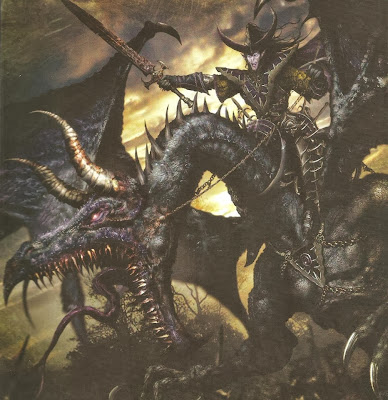 Dark Elf rules are now flowing, and it includes pics from the Army book. Dark Elves are looking strong, and and this release is a big one that is long overdue for Warhammer Fantasy.


Please remember that until the army book is released, we are relying upon people reporting the rules from pics or seeing the book. So consider anything until release day a rumor.

These all come from HERO's Gaming Blog, and pictures can be seen there. Note that for the most part I took out the points listed below.
http://lkhero.blogspot.com/2013/09/new-dark-elves-from-book.html

Thank you for your enthusiasm. Do you mind if I ask you about how sea dragon cloak changed in this edition?
well it's now a 5+ scaly skin.

Just guessing now that zhangyi has left, but given that the scroungerunner's cost includes the bolt thrower, I'm quite sure the High Beastmaster can man the bolt thrower.
yes, he takes place of one crew. he get bs7.

Hydra and Kharibdyss
and one more thing... hydra and the kharibdyss both are monsters now, without handlers. though u can see two on their base, they're nothing about them in the rules.

Magic items aren't that great but everything else seems awesome. Is malus the exact same? What's the pricing on sorcereress and lords?
he's been changed slightly, now the daemon gives him +1 to WS,S,T,I and frenzy. any to hit roll of 1 hit a friendly model in base contact. supreme sorcerer is  with lvl3, dreadlord. sorcerer is with lvl1.

Rules for kuran and tullaris?
kouran 596432739 join bg and make them unbreakable. have a +2s crimson death, and a 5+AS with armour of grief which make a S5 hit every time an opponent hit him. tullaris 566432739 join ex and make them frenzy. have a magic great weapon which called the first draich that gives him 5+KB

Hydra Regen how specifically does it work ? Thank for answering all my questions by the way!
at the end of your phase if it still alive, u roll the number of dice equals the lost wounds. every 4+ it regain a wound.

This is nuts! If I don't go WE I may go with these girls and march and charge them up the field before they can get shot to pieces. Are they khanites and do they get the same bonuses from CoB as WE's?
no they're not brides of khaine, they're arena fighters. COB can give them 6+ ward save if join them... but still if they're 6'' within COB they can reroll all the failed rolls to wound. and COB have a bound spell can make them frenzy.

What does the magic item section look like, Do I still have access to the Hydra Banner (fingers crossed)
from my first glance they're not as good as HE. only 10 items, including one 100pts nearly useless sword(hydra blade, +D6 A, every close combat phase u must make a -2LD test or suffer -5WS, but gain HKB.) and one 100pts useless banner(banner of nagarythe, the unit take it will unbreakable). hydra banner is not there any longer, so does the banner make cosair frenzy.

Does Malekith get cheaper? Don't need points just wondering.
yes. didnt change much of his rules, now the circlet grants him an bonus dice if failed his casting/dispelling attempts once per magic phase.

points and options for black guard and cold ones pls. Also what does the medusa chariot thing do?
the chariot make units from this book in 6'' +1LD, and all others -1LD, called aura of agony.

Witch Elves keep poison? How does Power of Darkness work? Available lores?
yes they keep poison. power of darkness is one of the two signature spell, which cast on 8+, target the caster's unit. all models in unit get +1S until the caster's next magic phase, and recover D3 casting dice, if you rolled 3 dice, the caster suffer a wound that cant be saved by armour. dark elf have access to all eight lores this time, cheers.

can you list the magic items and new spell lore. Do executioners still have Killing blow or are they now D3 wounds
still KB, not D3 wounds.

rbt and handbow rules? what about the bleakswords? any rules for them? What about shades? do they still have options for great weapons?
rbt is now special and u can take four.(yes four) handbow become 12'', the rest stay the same. bleakswords have no other rules have to be metioned. shades, hand weapon and repeater crossbow, no armour. u can take great weapon or two hand weapons by 2pts/per model.

hows the assassin looking ? Manbane ? Repeater Bows armor piercing ?
poison attack. can get two hand weapon or a handbow. access to 50pts magic items and one of three poison. one is to wound roll+1, one is KB, the other is if u wound a model, his LD-1 for the rest of the game.

Is there a sac dagger and pendent?
yes the dagger is there. no pendent.

sac dagger
everytime when u cast a spell but before dispelling, u can use the dagger. remove a man from the unit, and roll a D6, 4+ u get an extra dice and must be rolled and add to the result, then opponent try to dispell. if u roll 1-3 then u can try the dagger again and again until you get a dice, or you can simply give up.

WE Initiative?
they're I6

what's the chariot with RBT do ? is it special or core ? thx for the pictures and information!
it's my pleasure:P it's special, profile is S4 T4 W4 with 5+AS, M9, two crew with spear and repeater crossbow. it has a harpoon launcher, like a bolt thrower but far more powerful. it's S7, 24'' range, and cause D3 wounds. if a monster suffer any wounds from it, the monster will be dragged D6'' directly towards it. if D6>3, the monster suffer another wound with no AS.

What would you say is the best magic item the DE's got? The dagger sounds pretty nice, how much does it cost?
DE have some "OK" items IMO, but i cant tell which is the best. wait for me to post them.

it looks like the Dark Riders now have shields? Is this a default now, or still an option which causes loss of Fast cav?
it's an upgrade with 1pts/per model. DR can have both light armour and shield without losting fast cavalry.

Warlocks:
they're fast cavalry in rare with state 544431528, and M9 on horse. 25pts/per model. they only have hand weapon, but have 4+ward save except for wounds caused by model with mark of slaanesh or daemon of slaanesh. they're considered to be level2 wizard which is used like pink horrors. +1 for casting value for each extra rank except the first, to a max of +3. they know 2 spells, one is doombolt from DE army book(see #2221), the other is soulblight from lore of death. great unit.

I'm afraid to ask but... how much for a Dark Rider?
per model with light armour. 1pts for shield, 3pts for crossbow.

what's the basic warrior cost ?(without spear , shield , RXB ..)
shield is auto. spear is another auto. for spearmen and swordsmen.RXB is 12pts without shield upgrade(+1PTS)

Last masochistic question: Sisters of Slaughters?
they're rare choice with very impressive state 564331629. 15pts/model, with shield and hand weapon. can have a magic banner up to 50pts. 4+ward save in close combat, and every close combat phase it can choose an enemy unit in base contact. they lose parry and rank bonus in combat result.(still can steadfast). if any enemy model in base contact with them have highter WS or S(before weapon matters), they get +1 to hit and wound rolls.
9/30/2013
Natfka
Dark Elves, News Headlines, Rumors, Warhammer Fantasy