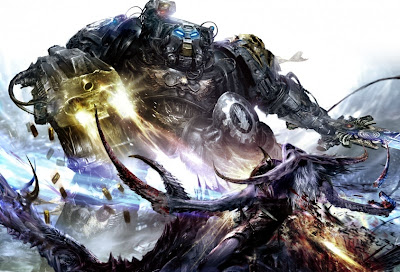 Iron Hands, one of the top new Space Marine Chapter options in the newly released codex, now has some rumors to what we might find in a codex supplement.


Please add extra salt on this rumor, at the request of the source. There is some question on whether or not this was speculation or work in progress. Getting this out though, might inspire other sources to chiming in if they know something along these lines.

via an anonymous source on Faeit 212 (please extra salt on this one)
I've been given a slight nudge towards the Iron Hands Supp, might be nothing, there was a hint towards the special issue wargear that they would have access too,

A Servo-Harness for Captain/CM, also gaining the rules of Blessing of the Omnissiah, though not gaining the chapter trait for the 1+, letting techmarines and MoF still have that little niche. Weither it can be used with Terminator Armour is still up in the air.

A standard upgrade is also being added to the choices for characters, which is a 1+ to FnP, something about robotic limbs.

Also Techmarine's may be an upgrade to Tactical Squads/Purchased per Tactical Squad, not sure which the hint was very very held-back.