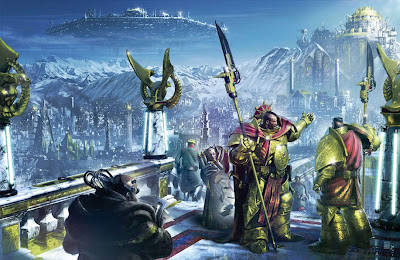 Forgeworld is apparently moving forward with a new Manager, which includes the chance to see Forgeworld models on the GW site, and able to be sold through its stores. Now just a couple weeks ago we were hearing that this wasnt going to happen, but it seems it may be back on the table.


While I have had some confirmations much of this true, and multiple sources saying some of the same things, these are still rumors. Treat them as such.

Forgeworld is less profitable than games workshop, this is a complicated subject with many business nonsense theories, but despite the price difference the profit margins are equal at best on high selling fw products versus low selling GW products

without combining the production etc FW couldn't meet the initial demand for its products, this is standard new product buzz, over time it could cope, (see tau for example)

on the other hand, the FW team has a new manager, with basically a whole new staff, including a LOT of jobs in various levels of the supply chain, plus future jobs

rumor among managers is the GW site will include order-able fw when it is updated, the big buzz on this is the chance to sell FW through our tills, which would give us a major boost at a time when our sales targets are being compromised by changes


*via Tim the Thief on Faeit 212
Forgeworld Products will on the new GW shop sell like other Products, no credit cards or other stuff needed! FW will increase the production, the factory will be expanded.
9/09/2013
Natfka
Forgeworld, Rumors